Mobile voice prices have halved since 2013

And, voice calls are not dead… not anywhere close!

The effective price per minute of mobile voice calls on South Africa’s largest mobile network has more than halved since 2013. While not explicitly disclosed by the operator, the current blended price per minute (across both prepaid and postpaid) on Vodacom’s network is around the 46c mark. Voice prices are down 42.2% over the past three years (a fact it included in a presentation to the market on Monday). In the prepaid space, where tariffs tend to be lower, the effective voice rate is closer to the 30c per minute level.

It is important to note that this is an effective price per minute. In other words, it includes the effective rate per minute for bundled voice minutes in contracts, as well as the rates for calls in promotional bundles on prepaid. An example of this is Power Hour, where 60 minutes cost R8 (13c per minute). On contract, the out-of-bundle price of calls (anywhere from R1 to R1.90) bears little resemblance to the reality of what most people end up paying. So too, the base rate for calls on Vodacom’s five prepaid plans.

Key to driving these prices lower has been two things: First, the intervention by government and the regulator (Icasa) to dramatically force down mobile termination rates since 2013. The current rate of 13c is almost one tenth of what it was in 2009/2010 (R1.25 per minute)! This, despite what operators argued, provided an artificial floor to prices. Second, the shift to in-bundle usage. Vodacom has been the most successful of the operators to shift customers onto integrated price plans on postpaid (its Smart and Red packages, which bundle a large amount of voice minutes alongside SMSs and data) and bundled use in prepaid. A quarter of all mobile prepaid revenue is now in-bundle, from a fifth (20%) a year ago.

Vodacom says it sold one billion voice bundles in the year to March 31 2017. That is an incredible number, given that four years ago it reported an amount of 333 million. In total, 16.4 million customers use bundles (primarily voice and/or data) and its targeted and personalised “Just 4 You” offers are seeing substantially better conversions. Here, it is targeting propositions to customers based on their behaviour (and needs and wants). The operator sold 728 million Just 4 You bundles last year, nearly triple the amount it managed in FY2016 (to March last year). Expect a lot closer focus on this segmentation.

The reason for this is that voice calls have soared. The total number of minutes on outgoing calls, or calls being initiated on the Vodacom network (to other networks or other Vodacom numbers), is up 73% over the four years. Incoming calls are up 4%, with the total 56% higher. This should not be surprising, given Vodacom’s market position (with ± 50% of the market, depending on the measure). 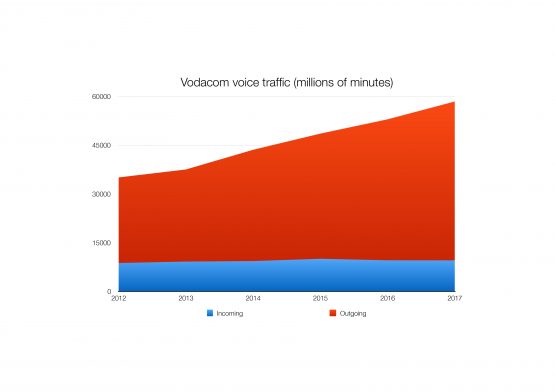 In FY 2017, Vodacom had 58.409 billion minutes registered on its network. Put another way, that equates to 160 million voice minutes per day, on average (for perspective, a day is 1 440 minutes).

Minutes of use per month per subscriber is up strongly in the prepaid space since 2013 and is flat in the contract market (a great result, all things considered).

But voice is not the only product where prices have dropped significantly. Because of bundle use, effective data prices have also declined. But that’s a story for another day….