Perceptions of excessively high bank charges have, over the years, driven consumers away from the traditional big four retail banks to up-start Capitec. But it seems the big four are fighting back.

Capitec, arguably the fastest growing bank in the country, is said to be popular among the low- to middle-income and student markets due to its simple and affordable Pay-As-You-Transact (PAYT) account – its only account type. But fee schedules for 2017 show that Absa, FNB, Nedbank and Standard Bank have undercut Capitec’s monthly account fee. This means that Absa now boasts the cheapest PAYT account while Capitec’s Global One account is the most expensive in the category. But, unlike Capitec no other bank is said to pay interest on positive PAYT account balances. 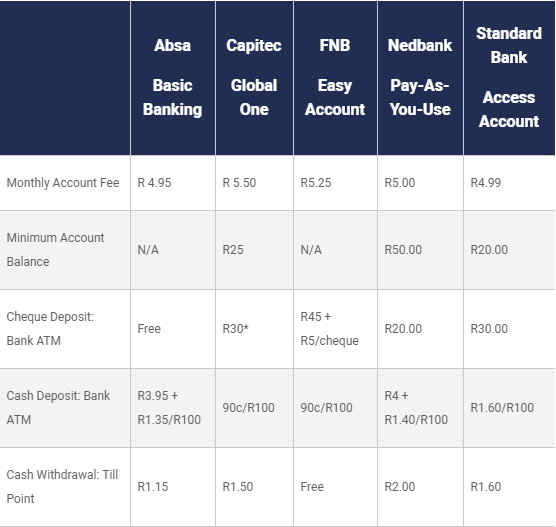 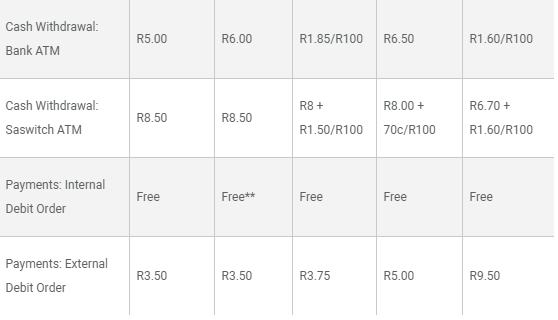 ** Capitec charges R3.50 for debit orders placed at a branch, the service is free online and via its banking app*Capitec does not charge a fee for salary cheque deposits

Although the difference in monthly account fees is marginal, the transaction fees quickly add up. A simple model, which includes a monthly account fee as well as combinations of ATM and till point cash withdrawals and internal and external debit orders, shows that the costs associated with Absa’s PAYT account still beats that of its competitors. ** Capitec charges R3.50 for debit orders placed at a branch, the service is free online and via its banking app*The above costs exclude optional SMS/email notification charges

In fact, Absa’s Basic Banking Account Fee combined with the above transactions is also marginally cheaper than its least expensive Flexi Value Bundle Account. At R 55 per month, the bundle offers unlimited debit card purchases and withdrawals as well as fund transfers and payments but caps ATM withdrawals and electronic payments, including debit orders. FNB’s Easy Account Bundle, a similar offering, costs R53 per monthly while the monthly fee on Nedbank’s Ke Yona Bundle is R50 and Standard Bank charges R100 per month for its Elite Banking Account.

PAYT accounts are said to be best suited to consumers with limited monthly transactions. Given this and the higher margins that banks are likely to make off premier accounts it’s no wonder that the big four don’t aggressively punt their PAYT offerings.

But PAYT accounts can go a long way in ensuring financial inclusion in South Africa. The 2016 FinScope Study on Financial Inclusion found that 11% of the adult population or 4.3 million adults are entirely excluded from the financial system. It found that the country appears to be financially inclusive on the surface as 77% of adults are banked but if South Africa Social Security Agency (Sassa) card holders are excluded only 58% of adults are in fact banked.

In a separate study the Boston Consulting Group found that perceptions of high fees limit the use of banking services in the country. Forty percent of respondents in a survey, the results of which were published in 2017, said transaction account fees are too high with one even saying that “the mattress doesn’t charge for small withdrawals”. It also found that only 24% of adults make more than three monthly transactions including deposits, withdrawals and swipes in order to avoid fees. As such, more than 60% of all purchases are paid for in cash.