What is Eskom not telling us?

Moneyweb has reliably learnt that Eskom and the Public Investment Corporation are finalising a deal that will see the latter acquire a portion of Eskom’s home loan book for an undisclosed amount.

The deal raises a whole lot of questions not least of which is whether the transaction is being conducted on an arms-length basis. But the deeper implications are truly frightening. Eskom is probably about to run out of cash.

Eskom established the wholly-owned Eskom Finance Company in 1990 to provide Eskom employees with access to home loan finance at optimal home ownership costs. The loan book built up over the years and as at the end of March this year stood at R8.6 billion. Against this, Eskom has raised debt securities and borrowings amounting to some R7.8 billion.

We learnt from sources last week that a deal was being finalised that would see Eskom selling about R6 billion worth of home loans to the PIC. The sale would allow Eskom to release the debt securities and borrowings used to fund the loans on a rand for rand basis, essentially allowing the company to divert the funds elsewhere.

But, when asked for confirmation, the PIC said: “The Public Investment Corporation (PIC) is not aware of the purported deal to be finalised this week.  However, the PIC, through its Unlisted Investments division, has responded to a Request For Proposal (RFP) publicly issued by Eskom on August 18 2017, which invited interested parties to respond to the pre-qualification process for the sale of Eskom Finance Company (EFC). The RFP was published in both the Eskom tender bulletin and the National Treasury tender bulletin sites. As far as we understand the process, the pre-qualification process would enable the preferred party to, among others, conduct due diligence with a view to submitting a binding offer to acquire the business of EFC.”

Eskom said in their reply: “Eskom will issue a media statement if, and when, it reaches a funding agreement with any financial institution. In the meantime, please note that Eskom’s funding plan as announced earlier this year remains unchanged (see slide 15 of the attachment for ease of reference). 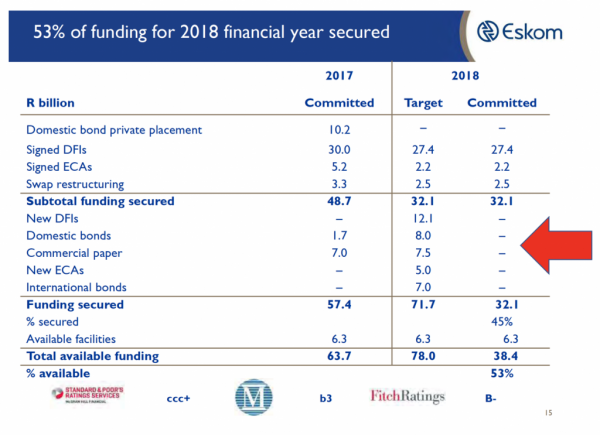 The slide referred to lays out the quantum and expected source of capital Eskom intends to raise for the current financial year to end March 2018. When presented with this slide at the company’s annual results presentation in July, we were very sceptical of Eskom’s ability to successfully tap these sources because of the perception of its governance standards by local and foreign investors.

Now for the truly terrifying part. Have a look at that slide again at the middle row. Eskom was planning to raise R39.6 billion from new relationships with Development Finance Institutions (DFIs) and Export Credit Agencies (ECAs), through the issue of domestic bonds (a market it hasn’t publicly tapped in years), commercial paper and international bonds.

According to the investors we checked in with, Eskom has not issued any bonds in the local or international market this year, nor has it issued more commercial paper. There have been no announcements by the company with respect to deals signed with export credit agencies, which only leaves funding from relationships with new development finance institutions.

In this regard, Eskom did sign a $1.5 billion loan with the China Development Bank before the results presentation in July and this was included in the top row next to “signed DFIs.” So, none of the proposed sources have provided any capital. Which means that at the end of October, seven months into its financial year, Eskom has not seen a cent of the approximately R39 billion it was expecting to raise this year. “It’s suffering from an investment strike – no one wants to touch them,” was the way one fund manager described the situation.

The cupboard is bare. The question it begs is, is the end nigh?