According to a market update issued to shareholders, Micheal Upton, Edward Williams and Cora Fernandez tendered their resignations alongside Mandindi.

After months of being under business rescue, construction company Group Five has lost their chair Nonyameko Mandindi, along with three other non-executive directors.

According to a market update issued to shareholders today, Micheal Upton, Edward Williams and Cora Fernandez tendered their resignations alongside Mandindi. 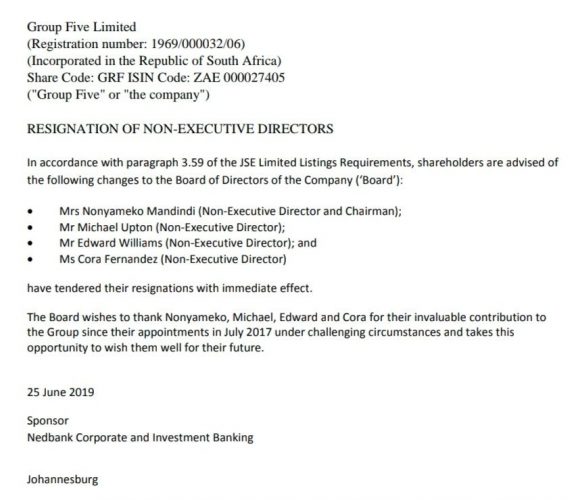 Business Day reports that lenders pulled the plug on the embattled business earlier this year causing it to declare bankruptcy, and it was just last week that they told shareholders that they are unlikely to get anything out of its business rescue process.

The process refers to a legal framework aimed at rehabilitating financially distressed companies.

Over the last few years, Group Five has suffered yearly financial losses and by the end of February, their liabilities exceeded their assets, according to a report published on their website.

Group Five board ‘reckless’ – shareholders
1 year ago
1 year ago

Group Five board ‘reckless’ – shareholders
1 year ago
1 year ago