Staying optimistic during a booze ban: The story of a brewery owner 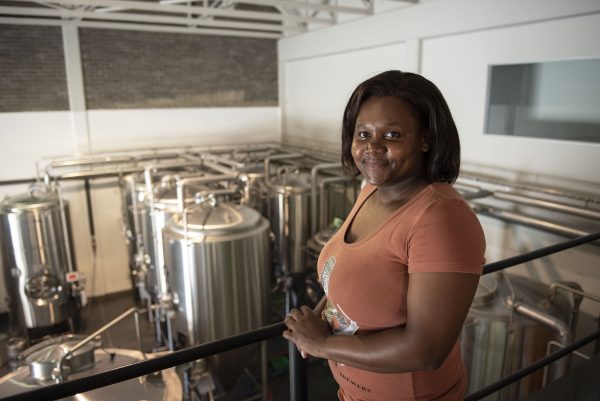 Apiwe Nxusani-Mawela, owner of Brewsters’ Craft, poses at her brewery, 22 January 2021, in Roodepoort. Nxusani-Mawela was the first woman to become a brew master and she is the head of the Association for Craft Brewers and Chairperson of the Brewers’ Association. Picture: Michel Bega

The alcohol bans during lockdown have brought a lot of hardship for small business. While business owners have tried to think out the box and make a plan to keep going, many will have to throw in the towel if the ban continues much longer.

Her brewery is the first black-woman majority-owned brewing company in the country and she was the first person in South Africa to complete a national diploma in clear fermented beverages.

However, if the alcohol ban extends past 15 February, Apiwe Nxusani-Mawela will have to start retrenching staff she managed to keep all through the lockdown.

Nxusani-Mawela founded Brewsters Craft in 2015 and became the leading provider of training, quality analysis and consultant services within the South African brewing industry. She has over 12 years practical brewing experience and holds a BSc (Hons) in microbiology from the University of Pretoria, as well as a master brewer qualification from the Institute of Brewing and Distilling.

After starting Brewsters Craft in 2015, she offered training and consultation to the craft brewing industry. In 2017, she received a loan from the Industrial Development Corporation (IDC) to open her brewery based in Roodepoort. She currently has four permanent employees and four interns.

When the first lockdown started almost a year ago, Nxusani-Mawela and her staff explored many alternatives. She said during the first ban they looked into switching from brewing to manufacturing sanitisers.

“After working out the costs and red-tape involved, we rather brought in bulk sanitiser that we packaged and sold in smaller units. During the second ban, we launched our non-alcoholic offering and during the current ban we have focused more on the training side of the business.”

Nxusani-Mawela said these alternatives were just a means to keep going day to day, but not enough to sustain the business and keep staff employed. “I have not yet had to retrench staff. During the first ban, the UIF Ters payments helped a lot, but during the second and third bans we all had to take huge salary cuts.”

She said whatever little money was made was split evenly for everyone and at times she used her own savings to ensure that everyone at least had something to take home. Unfortunately, this cannot continue much longer.

“I was telling my staff just the other day that if the ban continues past 15 February, I will have to let go of at least two people.”

Asked if it was always her dream to own her own brewery, she responded: “Honestly it was not even something I thought possible or doable,” she said. “The idea started around 2011-2012 when I started meeting other people who had started their own craft breweries and seeing the global trends. The idea remained an idea for a long time as I could not see how one could actually bring it to reality as I did not have access to funds.”

Asked if it was hard for a woman to run a brewery, she said: “Women are historically the ones who used to brew before brewing was heavily industrialised. In African cultures women are the ones currently brewing. So, no, it is not hard to run a brewery, because we have been doing it. It is just society that does not expect it and see it as abnormal.”

At the moment, Nxusani-Mawela and her team are focusing on their training offering and building the Tolokazi brand on social media and taking pre-orders to deliver once the ban is lifted.

“[We will] continue doing everything humanly possible to keep the doors opened and the lights on.”

Brewsters Craft offers a wide range of in-house courses from introduction to brewing science, cider making and sorghum brewing, to courses on setting up and running a microbrewery. It is accredited with the FoodBev Seta to offer a range of skills programmes and a NQF3 brewing qualification.

“Each year I take in young graduates through internships and learnerships to train them on brewing to create a pool of skilled young brewers for the industry.”

Nxusani-Mawela admitted the alcohol ban was hard but she remained optimistic. “I believe there are some positives to have come out of the lockdown, such as the fact that people appreciate locally produced products more, while more people, including government stakeholders, now know more about our industry.”

She believes that more people are now also aware that it is possible to own your own brewery and start your own brand and have also noted an increased appreciation and understanding of craft beers, especially among the non-white communities.

Nxusani-Mawela said she also understood and appreciated that her success was not only hers, but also of many young black women and men who needed to see that anything was possible, regardless of your background, upbringing or circumstances.

She has a message for other people in the same boat: “We all have to live on hope and keep the faith in a better tomorrow on the other side of all this.”

Digital Vibes: How Mkhize's aide splurged on Gucci, Smeg and a Turkey holiday
8 hours ago
8 hours ago

Digital Vibes: How Mkhize's aide splurged on Gucci, Smeg and a Turkey holiday
8 hours ago
8 hours ago