Mango staff are expected to continue working despite not being paid a cent. 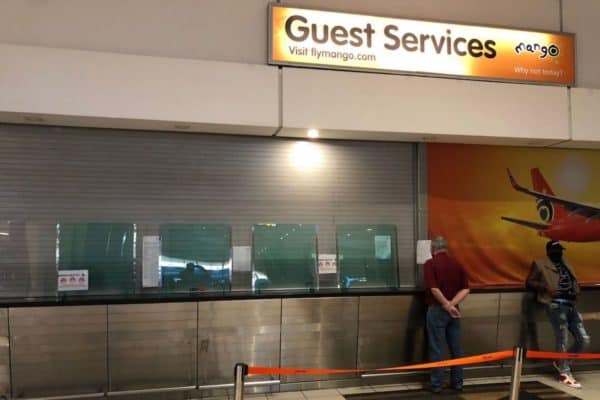 It is now approaching two weeks after the 25 June payday and staff are still in the dark about when they would be able to pay their bills. File image for illustration.

Mango employees’ June salaries have not been paid yet.

It is now approaching two weeks after the 25 June payday and staff are still in the dark about when they will be able to pay their bills.

The wait comes after employees received a letter two days prior to payday advising them that there were no funds to pay salaries.

This was in turn followed up by a mail from Mango acting chief executive officer (CEO) William Ndlovu, explaining the process that the ailing carrier had to follow for funding, and that Mango management had zero control over most of what happens.

‘Out of our control’

“When we say things are out of our control we mean it,” Ndlovu wrote to staff.

“We have no intentions to see our staff suffering as they do. We do call all the time to find out about the progress and that is all we can do.”

He went on to say that “we all need the patience and hope that those who are responsible for approving and moving our application [for funds] along the process do so as quickly as possible”.

Unfortunately for Mango staff, it seems that this has not been the case.

“All we can do is call the SAA [South African Airways] company secretary” the note states elsewhere.

Despite several messages. Richard Mantu of the Department of Public Enterprises (DPE) did not respond to any questions from The Citizen and neither did SAA, by the time of filing this story.

One of the questions The Citizen sought to validate was whether the DPE had requested SAA to lend Mango the money to pay salaries last week, and that it would be refunded when the R2.7 billion subsidiary bailout was paid across.

This information, although unverified, was shared with The Citizen from a source inside the airline.

Mango’s Benediction Zubane told The Citizen that “we are yet to receive the much-anticipated funding as expected any moment from now. We will update all stakeholders as soon as possible”.

Insofar as the unpaid salaries, he said “we are yet to pay June 2021 salaries, and this is due to the much-anticipated, pending shareholder funding and insufficient income generating opportunities thus far.

“We hope to update all stakeholders on July 2021 salaries in due course.”

“Colleagues have been unable to pay rent, bonds, accounts and school fees,” said a Mango staff member to The Citizen.

“Many of us do not have family that we can rely on for any kind of financial assistance, let alone put petrol in our cars or catch a taxi to work.”

Mango staff are expected to continue working despite not being paid a cent.

“Worst of all,” the staffer said, “is that our medical aids may lapse. This is something none of us can afford considering, particularly, that we are at higher risk to contract Covid than most due to our engagement with many people.

“But what happens and who will pay our bills if we get sick?”

The National Transport Movement took Mango to the CCMA last week where the airline committed to a meeting on Tuesday 7 July. But the union was stood up.

In a mail shared with The Citizen, union representative Koketso Lekwape said to Mango’s human resources that “I had requested the shop steward to write an email to you following the challenges I had encountered earlier this morning”.

“We have attempted numerous times to call you with no success. You remain unreachable. Furthermore, we have been waiting in the lobby since 11:05 to be accepted in the meeting without consideration.

“It is clear that management has bluffed us to believe that such a commitment would be honoured following an agreement at the CCMA last week. We place it on record that such stance will not be tolerated and shall seek relief at relevant institutions.”

The meeting has since been moved to Friday this week.

“If we do not get satisfactory answers from Mango, we would have to declare a dispute at the CCMA,” said Koketso.

The National Union of Metalworkers of South Africa (Numsa), the South African Cabin Crew Association (SACCA) and the Mango Pilots Association had even less luck after sending a second plea to Public Enterprises Minister Pravin Gordhan for an audience.

It was in a bid to understand the likely future of Mango following the surprise announcement of the Harith and Gidon Novick consortium, Takatso, as SAA’s potential equity partner.

Since sending the request to the DPE on 17 June, they have heard naught.

Mango Pilot Association chair Jordan Butler said to The Citizen previously that “it is a travesty that the staff are caught in the crossfire of what is clearly a political agenda. Especially after the sacrifices staff have already made this year to keep the business afloat”.

“Staff are worse of this month than in lockdown.” He was referring to voluntary salary cuts taken by employees last year to prop up the company during hard times.

In May, The Citizen reported on the emotional and psychological damage Mango staff had likely gone through, with psychologist Louisa Niehaus saying that being kept in such limbo, for so long, can lead to depression and other negative states of being.