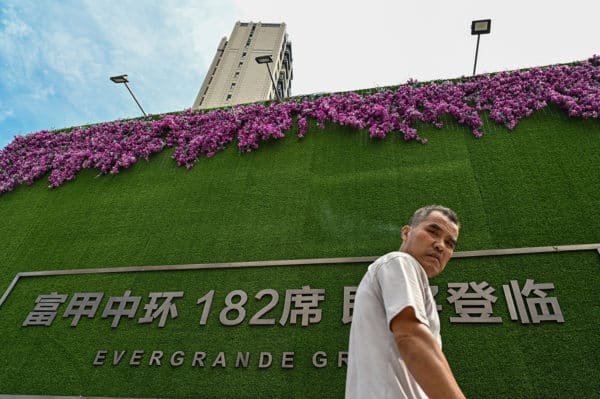 A man walks past a residential building developed by Evergrande in Shanghai on September 24, 2021. (Photo by Hector RETAMAL / AFP)

Indexes “flashed red across Europe and Asia… as uncertainties remained over the future of troubled Chinese property developer Evergrande, with no news on whether it had made its latest bond interest payment”, said Russ Mould, investment director at AJ Bell.

News from China also sent cryptocurrencies plunging as the country ruled all transactions in the digital assets illegal.

Bitcoin, which had already been falling before the announcement, dropped as much as 8.9 percent in value before trimming losses slightly to stand at $41,019, down 8.2 percent.

Hong Kong and Shanghai indices tumbled as Evergrande’s silence over its interest payment fuelled investors’ fear that its potential collapse could spill over into the broader economy.

Markets across Europe were in the red in afternoon deals, while on Wall Street the Dow Jones Industrial Average ticked lower and the tech-heavy Nasdaq dropped at the open.

US traders had seen the Fed’s Wednesday move towards tapering its massive stimulus programme as a vote of confidence in the world’s top economy.

But as well as Evergrande, “the continued stalemate among lawmakers on whether to raise the debt ceiling, the Delta variant, and supply chain challenges continue to fester,” Charles Schwab analysts commented.

The supply chain woes were highlighted by sports giant Nike Thursday as it cut its sales forecast for the coming quarters.

Market players are keeping close tabs on Evergrande, with no sign that it had paid interest to overseas bondholders on a note due Thursday.

While the firm has a 30-day grace period to stump up before it is considered in default, the lack of information is keeping investors anxious.

Markets were sent spinning at the start of the week by fears that the company — one of China’s biggest developers in the crucial property sector — would go under and drag others with it, in turn jolting the domestic economy and possibly beyond.

But for now, there is a feeling that there will not be a “Lehman Moment”, such as when the bankruptcy of Wall Street titan Lehman Brothers in 2008 sparked a collapse on world markets.

Stock markets had enjoyed a couple of strong days prior to Friday on what appeared to be easing concerns over Evergrande.

It was not all gloom in Asia, as the Bombay Stock Exchange Sensex index crossed the 60,000 mark for the first time.

India’s markets have enjoyed whirlwind growth despite the outbreak of the coronavirus pandemic, more than doubling in value since April last year.

“Expectations of solid economic recovery and sustained growth in the next couple of years is keeping the bulls enthused,” Sandeep Bharadwaj of IIFL Securities said.