Embattled domestic low-cost airline Skywise has been subpoenaed to appear before the Air Services Licensing Council (ASC) on December 9, for alleged non-compliance with the conditions of its Air Services Licence.

The council, which resides in the Department of Transport, is the regulator mandated to license and control domestic air services in terms of the Air Services Licensing Act.

If an airline fails to comply with its licence conditions, the council has the authority to suspend the licence for up to two years, or cancel it. No domestic airline is permitted to operate without a licence.

The council told Moneyweb that it decided at its meeting on October 14 to request an official report from Skywise about the cancellation of its services as reported in the media the previous day.

This is a reference to reports on Moneyweb and in other media that Air Traffic Navigation Services (ATNS) and the Airports Company of South Africa (Acsa) grounded the airline at different occasions due to outstanding payments.

The council said it has since decided, “to subpoena Skywise to appear before the Council in terms of Section 20 of the Air Services Licensing Act, Act No. 115 of 1990, for alleged non-compliance with the conditions of the Air Service Licence.

“Skywise is therefore, expected to appear before the Council at the next meeting to be held on December 9 2015.”

Moneyweb understands the council issued the subpoena in reaction to further reports of frequent flight cancellations and the withdrawal of Skywise’s plane by a lessor last week, also due to non-payment.

The airline has subsequently leased another aircraft and resumed operations.

Skywise, which started operating in February this year, announced a revised flight schedule on October 20, of six daily flights between Johannesburg and Cape Town, down from eight. This revision took effect immediately and affected passengers were given the option to change their flights or get refunds.

Since then there have been frequent flight delays and cancellations with passengers turning to social media to voice their frustrations. 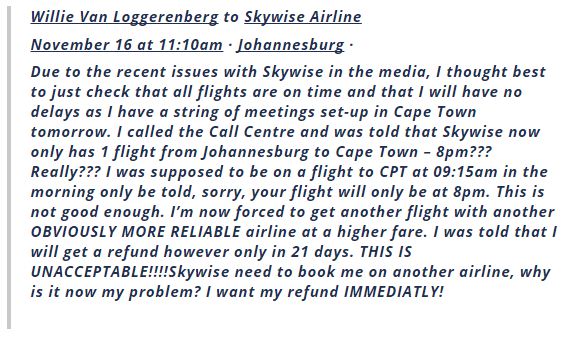 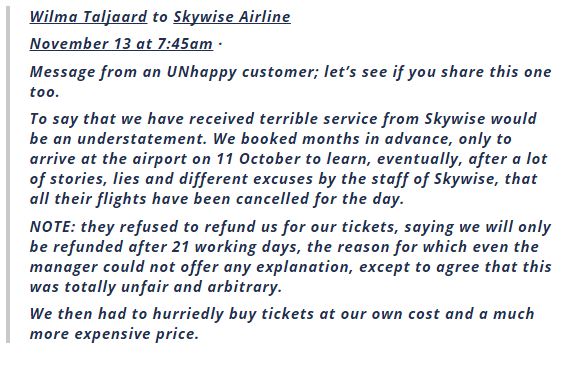 Taljaard confirmed to Moneyweb on Wednesday that she had still not received the refund in spite of promises from the airline.

Several airline insiders have told Moneyweb that Skywise is most probably cancelling flights when it has few bookings (low load factors). This, they say, may be a cheaper option than operating a flight with few paying passengers. In some cases Skywise allegedly accommodates its passengers by placing them on some of its later flights, buying them tickets on other airlines or leaving them to their own devices.

Skywise co-chair and acting CEO Tabassum Qadir, told Moneyweb on November 10: “Skywise is operating according to its current schedule of six daily flights between Johannesburg and Cape Town.”

When Moneyweb pointed out that the Acsa website showed only one Skywise flight for that day, she said: “There are six flights a day, except Tuesdays, when there are always only two flights because that is scheduled maintenance day.”

Moneyweb has monitored the live flight information on the Acsa website over the past few days. It showed four Skywise flights on Monday November 16. The first three were delayed by 40 minutes, 1 hour 9 minutes and 1 hour 17 minutes respectively and the fourth was cancelled. On Tuesday October 17 it showed two flights and on Wednesday November 18 four flights.

When confronted with the discrepancy, Qadir said: “Our schedule has not changed since it was released on October 20, we do indeed fly six flights a day on peak days (Monday, Wednesday, Thursday), with Tuesdays (two flights) and Wednesdays (four flights) on a reduced schedule. Saturday and Sunday remain the same as before, with four flights a day.

“This past Monday, we did have six scheduled flights, but due to bad weather in Johannesburg, which had a knock-on delay on several of our flights, we took the decision to cancel our last flight out of Cape Town (S8122), where passengers were accommodated on another airline.”

Said Qadir: “In terms of your allegations about load factors, that is not true. If we do experience technical challenges with our aircraft, we do what we can to assist affected passengers. While it does take some time to rearrange flights and shift the schedule due to technical issues, passengers may also choose to make their own arrangements in the meantime.”

With regard to the refunds she said: “As with all other airlines, our standard time for refunds is 21 days. We are processing refunds as quick as we possibly can and we appeal for customers to be patient as we work to assist them with refunds. We are also offering passengers free tickets (excluding taxes) in lieu of refunds.

She would not disclose the amount of outstanding refunds.

With regard to the subpoena, she said: “We have received a meeting request from the ASC and will be meeting with them to discuss recent, now resolved, issues which led to the cancellation of flights in October.”

Living in South Africa is an extreme sport
7 days ago
7 days ago
PREMIUM!

Living in South Africa is an extreme sport
7 days ago
7 days ago
PREMIUM!