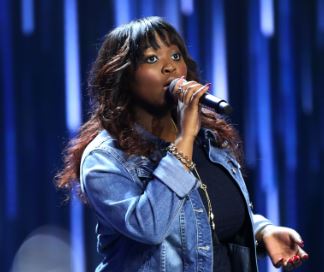 The 20-year-old singer from Mamelodi first stole hearts back in 2014 when she advanced to theatre week but was sadly eliminated in the group rounds.

With this year being her fourth attempt at fulfilling her goal of becoming South Africa’s next Idols winner, Mathe walked into the audition room in Pretoria to sing her prepared song Reach It by Afro-pop singer Zonke.

Scoring four yeses, Valentine qualified yet again for theatre week, not knowing that this time around fate would see her flourish into the Top 10 list.

READ MORE: The cars Mzansi’s top celebrities own (and the hefty price tags)

Having had the experience from her previous times on the show, Valentine had already acquired skills from her days of being a lead singer in a band she used in her first group performance of the season 12 music reality show.

“Singing a song like Halo by Beyoncé was not as easy as it looks, my voice coach pushed me till eventually I could start to believe more in my talent,” says the young hopefully, as she relives the night that marked a turning point for her as a possible contender.

“I have really learnt a lot from my time at Idols SA as well as made good and fruitful friendships with Noma and Amanda, and we plan to move to Johannesburg and make it big in the industry.”

Mathe seemed very fond of her time spent on the show and hopes that having stayed on the show as long as she did has changed her perception and idea of music, that it motivated her and her new “sistas” to believe in the possibilities that lie in their vocal cords.

Having performed at the DSTV Delicious Food Festival stage this past Saturday, October 8, Mathe admits to have been bitten by the celebrity bug, as she mentions how hearing her name being shouted by a large crowed of fans was breathtaking.

Based on her spunky, vibrant personality and tenacity, it is clear the name Valentine Mathe is not a name we will be forgetting anytime soon, as this is only the beginning.