'Being Italian, I have always loved to be loud and being in loud environments.' 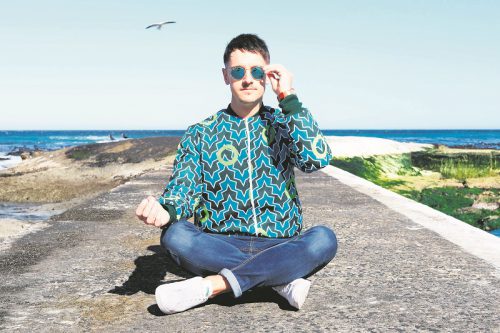 With a Slovenian headmistress and an Italian coffee cafe entrepreneur as parents, 24-year-old Danilo Acquisto is the new face on SABC 3’s Afternoon Express show, alongside Bonnie Mbuli and Jeannie D.

“I grew up in Johannesburg, with one older brother. My mother, who has now retired, was a headmistress at St Stithians College in Randburg and my father an entrepreneur in the coffee business.

“I have quite a humble family, we never grew up with much,” he says.

His parents emphasised the importance of education, which motivated him to read and gain a vast amount of knowledge on technology and gadgets.

“Because my mother was the headmistress at the college, my brother and I were fortunate enough to get a good education. What people don’t know about me is that I love reading and learning about things.”

After writing matric, Acquisto headed for the University of Cape Town in 2010 to study for a law degree.

He joined the campus radio station and then became the host of the campus drive-time show, Dashing On Your Dashboard.

“Being Italian, I have always loved to be loud and being in loud environments,” he adds.

The handsome Italian is grateful for his heritage and says he embraces the culture and traditions of Italy.

In 2012, the third-year law student found himself at a TV audition for a new kids’ show on SABC 2 and was told he could join the cast of Hectic Nine-9.

“Even though my parents were not for it, I told myself and them that this was something I want to try. I am glad I did as it has paid off – look at me today.

“I was thrown in the deep end and did not know what to do, but being an entrepreneur my personality had to shine and carry me through.”

During this time with the Cape Town-based radio station, Good Hope FM drafted him into the team as the weekend 12-3pm chart show host.

After four years on the youth programme, Acquisto went on to greener pastures.

He describes the transition as a “tempestuous” time as he was having disagreements with management.

But then he was told about the search for a Top Billing presenter.

“I was having quite a lot of fights with management as I was part of the production, writing and pitching new shows for the SABC.

“Eventually we decided to end the contract with the show as I didn’t agree with the direction they were taking the show in.

“It was a big risk but I thought that if I didn’t take it, nothing else would happen.”

Fast forward three years after that and the charming, charismatic Acquisto lands a spot among three of SA’s talented female presenters on the Afternoon Express.

Being a bachelor, this young Italian enjoys being out and about in Cape Town and has discovered some of the hidden gems which tourists don’t know about. And his business interests may also see him becoming a pioneer in SA’s digital space as he is involved in creating a new platform where young hopefuls who are having difficulties getting into broadcasting can produce their own content online.