Late actor and producer Shona Ferguson's daughters Ali and Lesedi said his death had shocked the family and it didn't feel real. Speakers at the late Shona Ferguson’s funeral at a private ceremony in Ruimsig, Johannesburg, on Wednesday, said his death did not feel “real”.

Connie Ferguson said she envisioned another 20 years with her husband and didn’t anticipate his death would happen.

Connie’s message was pre-recorded. In it, she said she never thought she would be speaking at Shona’s funeral.

Connie detailed nursing her husband for 28 days before his death.

“How I saw you at the hospital, how you fought. I want you to know how I am so proud of you. Even on your hospital bed, you defied the odds so many times.

“I am hurting right now, my heart is bleeding, I wasn’t ready to let you go.”

She added that as a praying family, they had never prayed so hard before, believing God would heal him.

“My husband loved hard and most importantly loved the Lord hard, unashamedly.”

Connie says she was lucky to experience a “once in a lifetime” kind of love with Shona. She says she has to find it in herself to continue.

“Our love does not die, you continue on in my heart, in my children’s heart. Thank you, Shonie for everything.”

Shona’s passion for the film and television industry was seen with several actors from The Queen and other shows in attendance.

Alicia said people would describe her relationship with Shona as weird.

“Some people thought we hated each other but it was far different than that. The main thing was that he and I were so alike, how I look a lot like him.”

Alicia says her dad motivated and encouraged her, helping her break out of her shell.

“He had no doubt that whatever I do, I was going to succeed.”

Holding back the tears, she added: “I am making him a promise, no matter what comes, what goes, I will always carry on his legacy. I will make him and my family proud.”

Lesedi said her dad had the ability to “love loudly”.

“Honestly, a lot of this doesn’t feel real… We lost a very [big] piece of our heart ” she said.

Affectionately known as Mr Sho, Shona’s older brother Dominque said he was in disbelief that his brother was gone.

Reflecting on their childhood in Botswana, Dominique said Shona was a bubbly and encouraging child. As a teen, he was often in fights and rebellious.

“He eventually grew out, he started to straighten out a lot when he met Connie. He developed a strong love for music, especially hip hop. He loves entertaining people, telling stories. As he grew older he got his hustle on.”

Dominique says Shona’s love and commitment to his family was inspiring: “You are the blueprint, a giant.”

Dominique concluded: “It hurts so much that you’re gone, bro. It hurts that I’ll never hear you call me Dom-digity again. I know you are not in pain now. I’m proud of the man you became in your short life.”

Shona died on 30 July, aged 47, due to Covid-related complications and not from heart issues as reported in the media, the family said in a statement.

Ferguson was known for his role in the original Generations series, where he played Ace. He later went on to join the cast of the Tshivenda soapie Muvhango, where he played the role of Dr Leabua.

He would later help grow local content with the help of Mzansi Magic, creating shows such as Rockville, The Queen, The Gift, The Throne, The Herd and The Imposter under their production company with wife Connie, called Fergusons Films.

Connie and Shona worked side by side to produce a series that soon became Mzansi’s favourite television shows.

The couple was present on social media, always inspiring their fans with their past struggles which shaped them into the successful actors and businesspeople that they became.

Connie penned a final farewell to her husband and shared it with her over 5 million social media followers on Saturday evening. 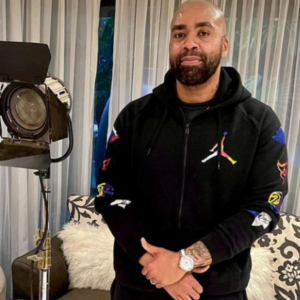