It is poignant a tragic conflict like the Palestinian/Israeli one should inspire such good filmmaking, usually focusing on the never-ending war and the immense problems it creates. 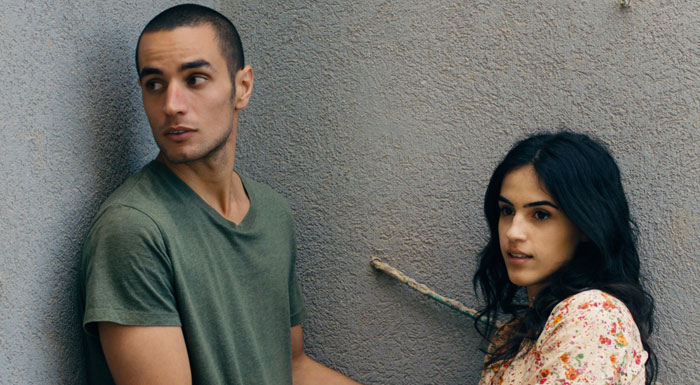 IN LOVE. Omar (Adam Bakri) is a Palestinian baker who routinely climbs over the separation wall to meet up with his girl Nadja (Leem Lubany).

And doubtless it will also inspire other similar and even better films, as there seems to be no quick movie solution to the region’s problems.

Therefore the Oscar-nominated Omar, which only reaches us now, simply laments and even highlights the people who are caught in the crossfire as they scale the wall or are involved in the dark goings-on behind the scenes.

Omar is first and foremost a story about friendship and tradition. It is about three best friends who will do anything for each other and whose brotherhood is put under intense and bloody strain when an Israeli soldier is killed during a shooting incident supposed to serve as an “experiment” and proof of manhood.

From here on Omar (Bakri) is blackmailed by the Israelis to turn on his comrades and sell out their cause, More importantly, he betrays his friendship with his two mates. This puts him in an incredible dilemma, which results in the film’s shocking final scenes.

Hany Abu-Assad’s fluid camera movements make for great and realistic chase sequences as well as tension, as Omar scales the wall that separates the two conflicted areas. The film is also a love story, as Omar will do anything to see his beloved, although the real love story is basically between three best friends. It also shows what influence the tension and conflict has on ideologies, loyalty, love and patriotism. In that sense it shows a certain kind of similarity with one of the best South African films ever made, Mapantsula, which also centres on an informant forced to split on his brothers.

Omar is a tough, often violent and bloody film, but also one with immense power and emotion.