A teary eyed-filled Our Perfect Wedding 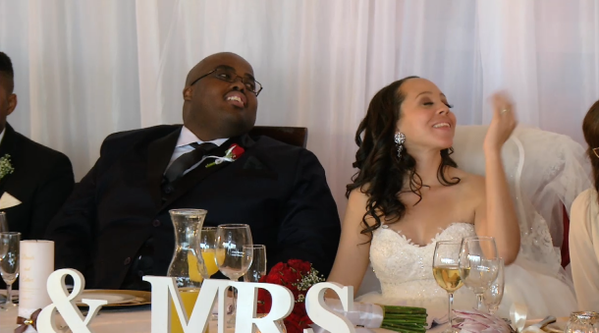 Dumile and Esther at their wedding. Picture: OPWMzansi

Esther had never really dated until Dumile showed up. As South Africans were saying “Philip is gone” at the 2010 world cup, Esther and Dumile were celebrating their love story. Their love story started when Dumile’s friend hooked them up in what was meant to be a girls’ night out.

Just before they walked down the aisle, Esther found a job as a teacher in Dubai. This brought tension within their relationship. Apparently, Dumile, did not cry when his lady left for Dubai, he just stopped talking and eating.

Dumile was at the helm of planning everything while Esther was in Dubai. The wedding is a dream come true for them as they have been wanting to become one.

Esther, like any bride, wanted Dumile’s mother to love her. As a result, both families connected well, even Esther’s mother said she was happy her daughter found someone she would spend her life with. The two families do have one thing in common: they are emotional. The type of emotional you see on Idols SA judge Unathi Msengana. We don’t know who’s influencing who, that’s how blended the two families have become.

One lady once said to me:”If there is something you don’t like about him before marriage, fix it then, don’t expect it to change in marriage, it will only get worse”. Esther reminded me those words when she said Dumile is boring and predictable and it would have to change after their wedding day.

Girl, I wish you all the best in trying to change a predictable and boring guy. Perhaps marriage will change him. We can only hope for the best.

Coming to the outfits:

The groomsmen’s black suits with a touch of gold were beautiful; I liked them. Dumile’s navy suit, however, did not cut it for me. I did say you wouldn’t want your best man looking better than you on your wedding day, I guess it wasn’t a big deal for Dumile.

The bridesmaids’ dresses were not good looking, get me? Why long-sleeved dresses though?  The colour, however, was beautiful.

Esther’s dress, the original one – the long sleeved one-  was different. She looked amazing in it. The second dress was gorgeous, besides the high waist.

The third, short dress was beautiful, we however didn’t get to see it at the wedding, how sad.

Let’s not talk about a photo booth being on the wish list, we can’t all want the same things, right?

For those who attend weddings for free alcohol, it wouldn’t have worked out for you on last night’s wedding. There was no alcohol, Esther wanted people “to have fun in a pure way”, to live in the moment, you know?

The wedding venue was beautiful. The vintage car was also amazing. I think I want that as well, more than one though because my siblings would want to ride in the cars as well, perhaps ten cars would do?

The cake? Beautiful and professional.

I did say the families are emotional, the groom started crying before the bride walked down the aisle. You remember the type of crying you used to do when you knew your mother was about to give you a hiding? Those type of tears. 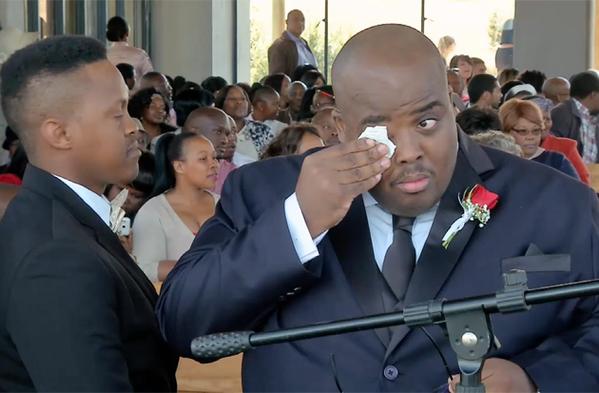 The vows were emotional and beautiful. They even had Aya teary eyed.

The speakers at the reception were funny as the best man, who claims he hooked them up, said everything about the couple is perfect. Apparently, even their fights are perfect.

Did I mention that the bride is a Mariah Carey’s look-alike? Please confirm this in the comments section below so I know I don’t need thicker lenses. This was indeed a perfect wedding, what did you think?