Springbok scrumhalf Faf de Klerk and Miné van Niekerk have had it tough with long distance and Covid-19. 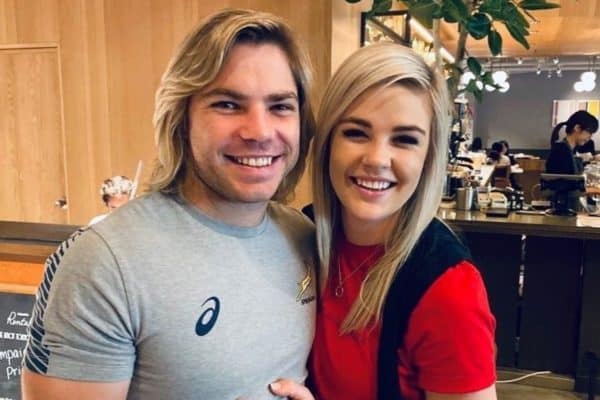 Covid-19 has had it in for Springbok scrumhalf Faf de Klerk and the love of his life, Miné van Niekerk , separating them for months on end and almost tearing them apart. But, after several months apart, they’ve realised that they are better together.

Faf and Miné met through mutual friends in 2015, and she invited him to a wedding thereafter. Apparently Faf is not only quick on his feet when he is on the rugby field, but also on the dance floor.

The couple has been together for about six years, and although they’ve had their ups and downs, nothing could beat the brutality of Covid-19 and lockdown. Faf has been living in Manchester since 2017 and they have been managing their long-distance relationship, but with the unpredictability of lockdown, they soon decided to rather just be friends.

Miné works as pharmacist at her father’s 34-year-old pharmacy in Postmasburg and she and Faf saw each other for the first time in more than a year when he returned to South Africa to play for the Sprinkgboks against the British & Irish Lions during the recent Lions tour.

Faf and Miné recently told Huisgenoot things got tough amid the pandemic. “We are so good when we are together, but the long distance makes it difficult,” Miné told the publication.

Faf says they realised they had no idea when they would see each other again after his two-month Postmasburg stay with Miné just after the World Cup. After his return to Manchester, they kept in contact, but the conversation later ran dry.

The Lions tour changed everything, though. As Faf prepared to return to South Africa for the tour, he phoned Miné up to ask which of her things he had to bring back and it was as if they had never been apart. He invited her to join him while isolating at a hotel in Cape Town upon his return.

Although the past few months were tough for Faf and Miné, it seems the two have realised one thing: in the end, they’ll always find each other.

While they are reluctant to make it official, saying they don’t want to put too much pressure on their relationship over long distance amid Covid-19, Miné says: “We are going to see how it works.”