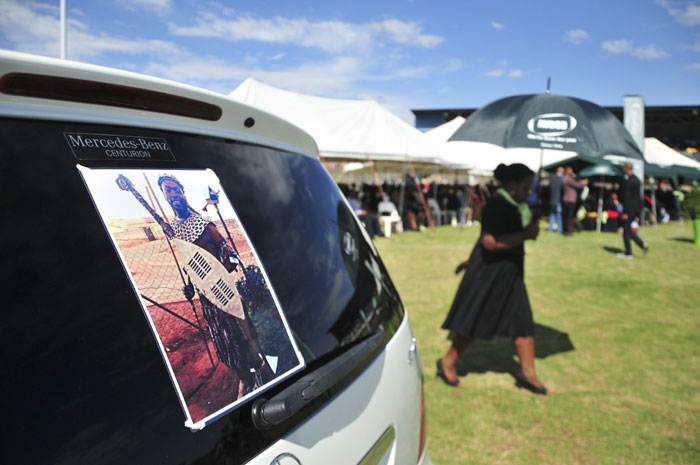 FILE PICTURE: An image of Nkululeko “Flabba” Habedi is pictured on a funeral procession vehiclel, 15 March 2015, in Alexandra Township, Johannesburg, during his funeral. Habedi died after his girlfriend allegedly stabbed him after a quarrel between the couple. Picture: Alaister Russell

Poet Mzwakhe Mbuli comforted the family and spoke of the loss the industry had suffered. “The music industry is poorer today,” said Mbuli. Tau said the City was grateful for Habedi’s talent. “Your role certainly is acknowledged, your contribution to the arts is indeed acknowledged. ”

Flabba’s daughter, Lesego Habedi, recited poem for her father, before the Holy Family School Choir took to the stage.

On behalf of Flabba’s wife, Mpho Habedi, Lerato Moselane read a note in which she said she was going to miss the family hug she shared with Flabba and daughter Lesego. “And I’m sad today that you’ve left too soon… I want you to provide me with strength, with guidance,” Mpho said.

Peter Lynch, programme director and Skwatta Kamp manager, said Flabba was to be buried in between two prominent figures – one of which was Jacob “Baby Jake” Matlala.

Flabba will be laid to rest at the West Park Cemetery after dying from a stab wound to the chest, allegedly inflicted by his girlfriend Sindisiwe Precious Manqele.

Manqele is set to appear at Alexandra Magistrate Court on Monday.