Could this be this season's most brutal episode yet? 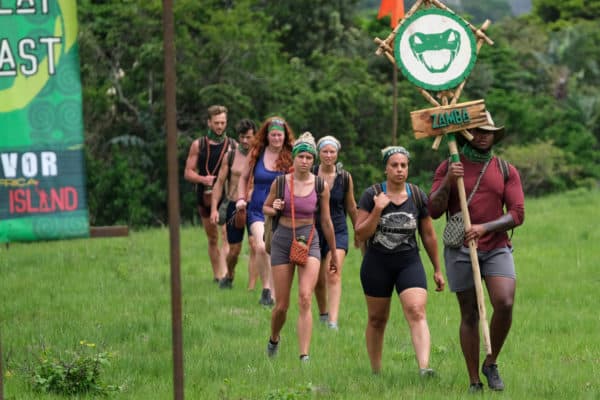 In episode 5 of Survivor South Africa, Immunity Island,  tribes Vuna and Zamba each culled a castaway last night as the thirteenth day of Immunity Island held bad luck for Thoriso and Carla. In a twist from the get-go, host Nico announced a double elimination as the tribes arrived at what they expected to be a straightforward Immunity Challenge. With news that both tribes would be attending Tribal Council still settling in, the Castaways had to choose to play for a trip to Immunity Island or for a chance to feast as they watched the other tribe voting out their chosen castaway.

Thoriso and Anesu were the only two Survivor castaways to opt to play for an Immunity Island visit and the Anesu took the honours, also winning her challenge on the island. During the challenge, when Zamba’s Wardah stepped off the balance beam, she guaranteed Vuna the feast, with Tyson and Nicole battling it out for the individual reward. When Tyson fell over, Nicole won the reward of a double portion, along with dessert and a beer. She chose a Pina Colada cocktail instead.

The rest of the episode saw an extended play of politicking and strategising. But it felt like an eternity as castaways lobbied, argued, aligned and painted targets on Thoriso and Tyson’s backs at Zamba. After the episode, Thoriso tweeted that they had to ‘drag me out’ after being voted off. Yet, during the show it seemed like her only strategy was the half bluff of holding an immunity idol. But she sealed her fate when she threw Tyson under the bus and made him a target. Throughout though, Zamba seemed calmer and a more cohesive tribe than last week.

They had to drag me out

Vuna on the other hand was more of a mess. We started seeing some undercurrents in last week’s episode, on a slow boil, with some dysfunction rising to the top. Carla was a target from the start and so was Tyson, but Kiran’s self-sacrifice strategy paid dividends. He masterfully did the math and offered to split the vote, and rake in some eviction notices himself. At Tribal Council, Tyson would have exited had he not presented the tribe with his immunity idol. Thoriso got the marching orders, along with her secret piece of paper.

I think the best way to sum up my game on episode 5 is with the sentence I used to start my game. That will be all your honour #SurvivorSA pic.twitter.com/0AEteZJlJW

At Tribal Council, the look on Zamba’s faces as Vuna gorged themselves on a boerie roll feast was priceless. So was Tyson’s smug grin when he hauled out his idol while Thoriso’s deer-in-the-headlights moment must have been the realization that throughout the show she was digging her own grave, not playing to survive. Her nine lives were reduced to one.

On social media Santoni is slowly emerging as a crowd favourite. Her double dealing and hustling along with blunt confessionals had Twitter raging during and after episodes.

It’s been 10 minutes with no Santoni confessionals what show am I watching?!

Two huge character losses this week on #SurvivorSA. It’s hard enough to lose a member of this cast each week but two in one week, and especially two who were providing so much in different ways, is brutal.

Survivor South Africa, Immunity Island is broadcast on DSTV’s Mnet every Thursday at 19:30