The Charity Mile was won by Argentinian import Hat Puntano, who now goes for the L’Ormarins Queen’s Plate. 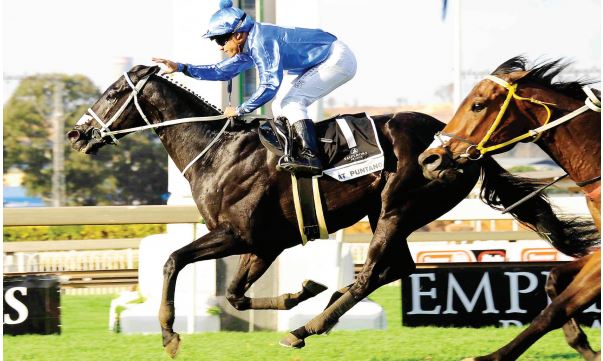 IMPROVED: Hat Puntano made immense improvement on his South African debut to win the R1-million Peermont Emperors Palace Charity Mile at odds of 13-1. It is unlikely punters will underestimate him again.

Punters are unlikely to see 25-1 for long about Social Order in the R2- million Gauteng Sansui Summer Cup after the Sean Tarry-trained four-yearold’s flying second to Hat Puntano in Saturday’s Charity Mile.

Social Order was mid division as Irish Pride whipped them into the straight in the R1-million Peermont Emperors Palace Charity Mile (Grade 2) over 1600m at Turffontein on Saturday and took a while to get going which resulted in him finding traffic problems.

However, when Lyle Hewitson found a gap, he scooted into top stride and might well have won in a few more strides.

As it was, the Count Dubois gelding had 0.75 lengths still to make up when the camera flashed and the lightly raced two-time winner will have been highlighted in many punters’ notebooks.

On breeding there is no guarantee that Social Order will stay the testing 2000m of the Summer Cup, but the manner of his Charity Mile finish suggests the track and trip will be within his compass.

Another Summer Cup horse who punters will have put a query against following the Charity Mile is Tarry-trained French Navy.

The query is only because French Navy has consistently flattered to deceive. However, Tarry made it clear before the Charity Mile that he believes French Navy has an outstanding chance in the Summer Cup off his current merit rating of 108, particularly because the trainer believes this son of Count Dubois is better at that trip.

So the Charity Mile was only ever going to be a preparatory run. Hat Puntano, a dual Grade 1 winner in Argentina – his country of birth – is not going for the Summer Cup. Trainer Mike Azzie has said he will instead be sent to Cape Town for the L’Ormarins Queen’s Plate in early January.

There he will bump into Tarry’s ruling Horse Of The Year Legal Eagle who has won the country’s premier 1600m race twice already.

Tarry’s stable star will be seen in action for the first time this season at Thursday’s Turffontein race meeting where he runs in an 1160m Pinnacle Stakes.

Abashiri, who is trained by the father-son partnership of Mike and Adam Azzie, is still favourite for the Summer Cup (Grade 1) on Saturday 25 November with Hermoso Mundo and Nother Russia disputing second-favouritism at 8-1.

Azzie sen was in two minds whether to allow him to have a preparatory run in the Victory Moon Stakes at Turffontein on Thursday night because of the 62kg he was allotted in the 1800m race, but has left last year’s Triple Crown winner in.

Nother Russia is another horse who will add immense interest to Thursday’s night race meeting at Turffontein. This Mike de Kocktrained mare will be running in a 1400m Pinnacle Stakes at the meeting. She will be having her first run since finishing a gallant third behind Deo Juvente and Legal

Eagle in the Premiers Champions Challenge over 2000m at Turffontein in May.

A few other horses caught the eye at Turffontein last Saturday, not least De Kock’s two impressive first-timers – Buffalo Bill Cody in Race 1 and Shufoog in Race 2. Both were ridden by Anthony Delpech. De Kock won another two races at the meeting, with Cascapedia getting the better of a ding-dong tussel with Al Danza in the Grade 3 Yellowwood Handicap and Mujaafy posting a good win in a MR 80 Handicap over 1160m.

Cascapedia shortened on Betting World’s Summer Cup board from 80-1 to 20-1 in the wake of that win.