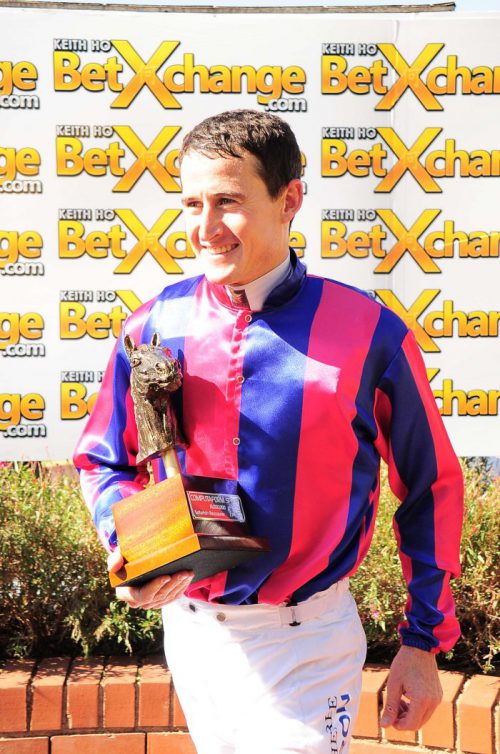 BERNARD FAYD’HERBE is the man to follow at Kenilworth today.

This Justin Snaith-trained filly was an impressive winner last time out and should be one follow. She has improved with each run and is yet to finish out of the money. I don’t see this changing, not in this event. A speedy Var two-year-old filly, she jumps from a good No 4 draw and will shoulder 60kg. Looking at her rivals’ form it’s hard to see her lose.

Her main threat should be Regal Ruby who is better than her last outing. She’s produced glimpses of talent and shouldn’t be far back with Grant van Niekerk in the irons.

Glen Kotzen-trained Tripple Explosion could be Fayd’Herbe’s second winner. He has finished second in his last two starts, so will it be third time lucky? I believe so. He is the best handicapped runner in Race 4 a Maiden Plate over 1600m. With respect to the wide No 11 draw he’ll have to overcome, he has much in his favour.

This three-year-old Trippi gelding shoulders 60kg – level weights with his main danger Redeemer, who returns from a rest and has been gelded.

Tripple Explosion should be in fine fettle following that last outing when only 1.75 lengths behind the winner. He loves the 1600m trip and should Fayd’Herbe overcome the draw, the pair could be unstoppable.

Although the rider has numerous other runners who stand chances of winning, his next best could be in the last race. This is another Kotzen-trained runner who will have to overcome a wide barrier draw. Three-year-old Var gelding Off Broadway has finished second in his last three outings, failing to justify favouritism. He could redeem himself here.

He is the best handicapped runner in the field and should relish the drop in trip. One should bear in mind this runner has been heavily backed since his debut start. Could this perhaps be a reflection of how highly regarded he is by the Kotzen yard? I think so.