Cracksman to score in Ireland 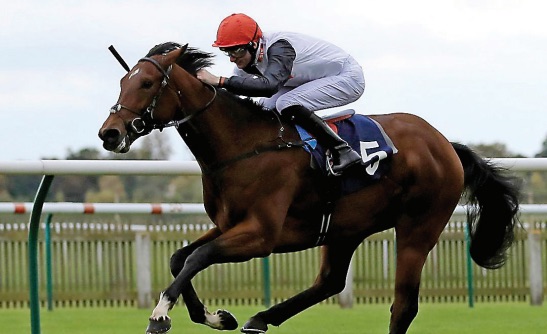 COURSE SUITED. Trainer John Gosden believes The Curragh will suit Cracksman be er than Epsom in his attempt to win Saturday’s Irish Derby.

Aidan O’Brien, fresh from clinching an eighth trainer’s crown at Royal Ascot last week, now has his sights firmly set on a 12th Irish Derby success with Epsom hero Wings Of Eagles at The Curragh on Saturday.

As usual Coolmore, who have won five of the six classics so far staged in England and Ireland this season, will be mob-handed, but Wings Of Eagles, who sprang a 40-1 surprise in the world’s greatest Flat race earlier this month, beat Cracksman (third) on merit and will now have the services of Ryan Moore, who rode Eclipsebound runner-up Cliff s Of Moher at Epsom.

Bookmakers can’t split Wings Of Eagles and CRACKSMAN, but I was all over John Gosden’s colt like a rash at Epsom and have no intention of deserting him here. Gosden, who won the Irish classic with Epsom second Jack Hobbs two years ago, has no doubt that Cracksman will be be er suited by the plains of Kildare than he was the undulations of Epsom.

He said: “I know that Cracksman won his trial there, but he would not have the brilliance of Golden Horn and, ideally, he wants a galloping track, so The Curragh will be right up his alley.

“I make no excuses for Epsom, but it was only his third race and his inexperience showed. Frankie (Dettori) was having to niggle him along going into Tattenham Corner to hold his position, and it was just a pity that we had to pull him out of his planned prep at York (Dante) because of the so ground.

“Cracksman stayed on really well up the straight, but he was maybe not quite streetwise enough on the day, and the way he has worked since Epsom suggests that he learned plenty from that.”

One has to respect Wings Of Eagles, who came from well off the pace to save the bookies at Epsom, and I fear him more than French challenger Waldgeist, who was cut down close home by the classy Brametot in the Prix du JockeyClub at Chantilly.

Andre Fabre feels this track will play to the strengths of Waldgeist, who carries the same silks as stablemate Hurricane Run, victorious in 2005, but although he is bred to appreciate this step up in distance, Waldgeist is not short of speed and in a classic sure to be run at a helter-skelter pace he could find his stamina stretched.

Turning the clock back to last week, there were so many wonderful memories from the Royal Ascot meeting, with Big Orange’s never-say-die attitude which enabled him to deny O’Brien’s Order Of St George from a back-to-back victory in the Gold Cup the standout.

And with the Goodwood Cup being granted Group 1 status for the first time this year, Order Of St George is likely to be back seeking his revenge on the Sussex Downs in August, though Big Orange, who has won that race for the last two years, is so brave and a hard horse to pass when in front that it could be another epic scrap.

Order Of St George and dual Guineas winner Churchill, who “never turned up” for the Group 1 St James’s Palace Stakes won by Godolphin’s Barney Roy, were virtually the only surprise reverses for O’Brien, who sent out six winners and had 13 others fi nish in the frame over the five days.

Three of those triumphs were in the top grade, Caravaggio being imperious in the Commonwealth Cup, the globe-trotting Highland Reel digging deep yet again to beat off all-comers in the Prince of Wales’s Stakes and dual 1000 Guineas heroine Winter barely breaking sweat in the Coronation Stakes.

O’Brien had told anybody prepared to listen beforehand that Caravaggio, unbeaten in six races, was “the quickest horse he’s trained”, and in giving the Godolphin pair, Harry Angel and Blue Point, three lengths start and still picking them up with a scintillating gear-change was something to savour.

We Brits are constantly having claims stuff ed down our throats from Australia that our sprinters cannot lay a glove on theirs, but such was the strength of last Friday’s opposition that I’d rate Caravaggio right up there with some of the great speed balls I’ve witnessed, horses like Moorestyle, Dayjur, Habibti and Oasis Dream.

And O’Brien revealed that John Magnier and “the lads” have an ambitious autumn target in Australia in mind for Caravaggio, who has been pencilled in for The Everest, the richest turf sprint in the world and being staged at Randwick in Sydney on 14 October. How us whingeing Pomms would enjoy that!

This season’s crop of threeyear-old sprinters certainly look superior to their older counterparts, and while The Tin Man, Tasleet and Limato, the first three home in last Saturday’s Group 1 Diamond Jubilee, will doubtless all turn up again for next month’s July Cup at Newmarket, I would expect both Caravaggio and Harry Angel to put them in their place.

She was drawn in the cheap seats and consequently was forced to race on the slowest ground, so how far would she have won had she had a more favourable stalls position?

It was terrific to see Godolphin back in the big time, Barney Roy’s Group 1 celebration being preceded by Ribchester confirming his position as Europe’s best older miler when winning the Queen Anne Stakes, not to mention the four other victories for the boys in blue at the meeting.

We may not yet have reached the half-way stage in the British season, but already there is a strong feeling that the juvenile fillies are way be er than the colts.

I can’t see Coventry winner Rajasinghe being more than a sprinter next year, whereas September looked a potential 1000 Guineas winner when becoming only the second filly to beat the colts in the Chesham Stakes.

Having said that, so did Heartache, who floored Ward’s flying machine Happy Like A Fool in the Queen Mary and Alpha Centauri, who, though outsped by French raider Different League in the Albany, is a magnificent looking specimen who could go right to the top of the classic tree at three.

There were some great riding performances – Ryan Moore, top jockey for the seventh time in eight years, excelled on September, as did James Doyle substituting for the injured Frankie Dettori on Big Orange – but booby prize definitely goes to Mickael Barzalona, who was awful on Usherette in the Duke of Cambridge Stakes, in which she was beaten by fellow French challenger Quemah.

One hopes that the unpredictable Barzalona will be back on his A-game when the two fillies clash again in the Prix Rothschild at Deauville next month.