Tomorrow racing is on the standside track at Turffontein. Race 1 I have made a two-horse affair between Maayaat and Dance Critic. I prefer Maayaat as she ran second first time out but it was a very weak field so Dance Critic, although she has not yet placed, could give her a go as she has raced against stronger opposition. 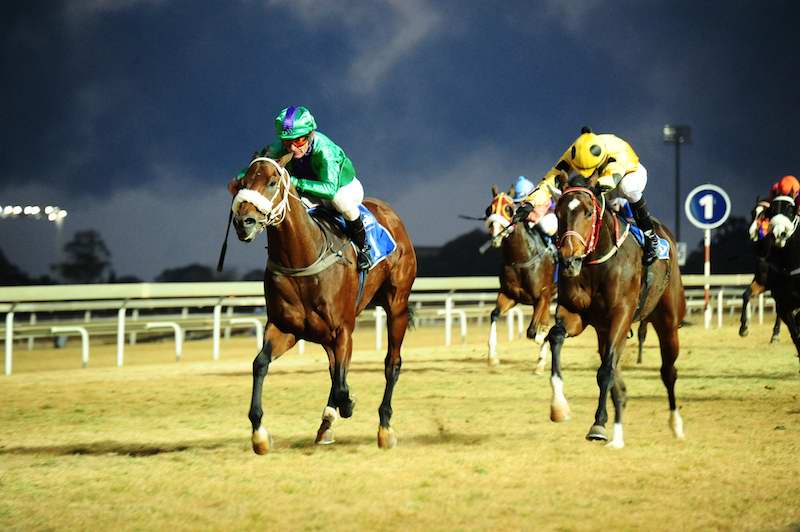 Crown Gold (green colours), who runs in Race 7 at Turffontein tomorrow, is Piere Strydom's value bet of the day.

It could pay to take Exactas and Swingers with the two.

In Race 2 I ride Luca Delago. I think on form he’s got winning form and he might even have the strongest form in the field. Unfortunately we have a shocking draw and it will be impossible to depend on him from that draw. Lisnoble also has a bad draw but he could be worth including along with Thunder Run, who does have a good draw.

Another horse to consider is Balado who is drawn No 2. He is already a six-year-old but has only had two runs so could improve from the experience.

For the Place Accumulator go with Luca Delago and one of the others.

Race 3 is a wide open race and you can easily include four runners for the Place Accumulator alone.  My first call is Weaponology but saying that, there is so much mixed form that anyone can win this race. Of the horses I’m going to mention I would consider all for the Pick 6 and four for the PA. They are Weaponology, The Golden Boy, The Fifth Day, Bow ‘n Arrow, Day Of The Tiger Dynamite Jim and It’s Mister To You.

The Fifth Day, who I ride, ran well last time but it was work riders’ race. He’s finally got some kind of a draw. In seven races he’s only once jumped from a decent draw. We’re also trying him without the blinkers because he’s known to travel quite hard in a race and we’re hoping he will be more relaxed.

I ride Yer-Maan in Race 5. Last time he won from way behind but the pace was very fast and there is no guarantee we’ll get the same pace again. He is also held by Mirage Drive on the turnover in weights, which is why I’m leaning towards Mirage Drive and Henry Higgins as the two horses to beat us. Those are my two horses for the PA and the Pick 6. If you’re going to look past those two you need to go with the field in the Pick 6

In Race 5 I don’t have a ride. I tried to get the ride on Klondike River as he’s got some decent form and jumps from pole position. He’s the horse you could consider making a banker in the PA but as there are a couple of horses with close form it might be wise to include Ganesh and Afterburner.

For the Pick 6 I would consider Mai Thaiga, Egyptian, Lions Emblem, What A Boytjie, Furaat Quality and Sammy Silver as well.

Race 6 looks another tough affair but I’m going to lean towards the form lines of De Var Hyt, One Cool Cat, Rambo and Greasepaint as my first four horses. You could probably pick three of those for the PA and all four for the Pick 6.

A horse who could improve although he’s coming off a rest and is fairly lightly raced is Foyle. He could be considered for the Pick 6.

In Race 7 I’m riding Malachite. I would be surprised if he can win this race as he’s held on form and I would be pleased if he can runner into minor money. We will be trying our best to win the race.

However, my banker of the day is Crown Gold. He beat Malachite comfortably in the run behind Indira is 4kg better off despite running six lengths ahead of my mount. Crown Gold had blinkers on him last time which have been removed and on past form he has run against much stronger than he meets in this event. At 5-1 he could be a value bet.

In Race 8 I ride Danielle. She’s got some form to indicate she could win this race but she could be better over 1000m. She also makes a respiratory noise and there are also form lines that run closely together. One needs a lot of horses in this race but I’ve found two who could provide value.

My first choice is Icelandic Fire, who is at 20-1. She ran behind Tzigane who would easily win this race and has dropped 11 points (5.5kg) in the merit rating since then.

Seattle Trade has run well off some shocking draws and is definitely one to consider. Those need to be included in the PA but for the Pick 6 you will probably need the field.