This an intriguing contest in which tactics could be crucial and “the smaller the field, the bigger the upset” is a horse racing adage many horse players will have in the back of their minds. Belgarion contemplates taking a carrot from Noks Zimu. Many pundits expect the gelding to give his rivals carrots in Saturday’s big race. Picture: Liesl King.

Belgarion, the new equine star on the block and winner of the Durban July six months ago, goes for a mighty big-race double in the Cape Town Met at Kenilworth tomorrow.

This is Cape Town’s race of the year and traditionally it would also trigger the city’s biggest party.

Unfortunately, the ravages of Covid-19 and its mutations continue, hence the race will take place behind closed doors for the first time in its history – as did the Durban July and Summer Cup last year.

Empty stands at sporting events are already a norm, though, and the lack of spectators will not impact on a huge television audience’s enjoyment of a feast of quality racing action.

The 12 races carded include six feature events and the day is loaded with opportunities to win wads of cash.

TAB has added fuel to one of the biggest betting days of the year with two mega carryovers – a R5 million Pick 6 add in that should generate a total pool of about R15 million and a R2 million boost to the Met Quartet (see back page for how to win the Quartet for R6).

Theoretically, the Quartet should be easier to win than normal because only 11 runners will go to post, a smaller field than is usually the case.

But this is an intriguing contest in which tactics could be crucial and “the smaller the field, the bigger the upset” is a horse racing adage many horse players will have in the back of their minds.

Belgarion is the flagship of a threehorse Met fleet from Cape Town trainer Justin Snaith, who currently leads the national trainers’ log by R2 million. 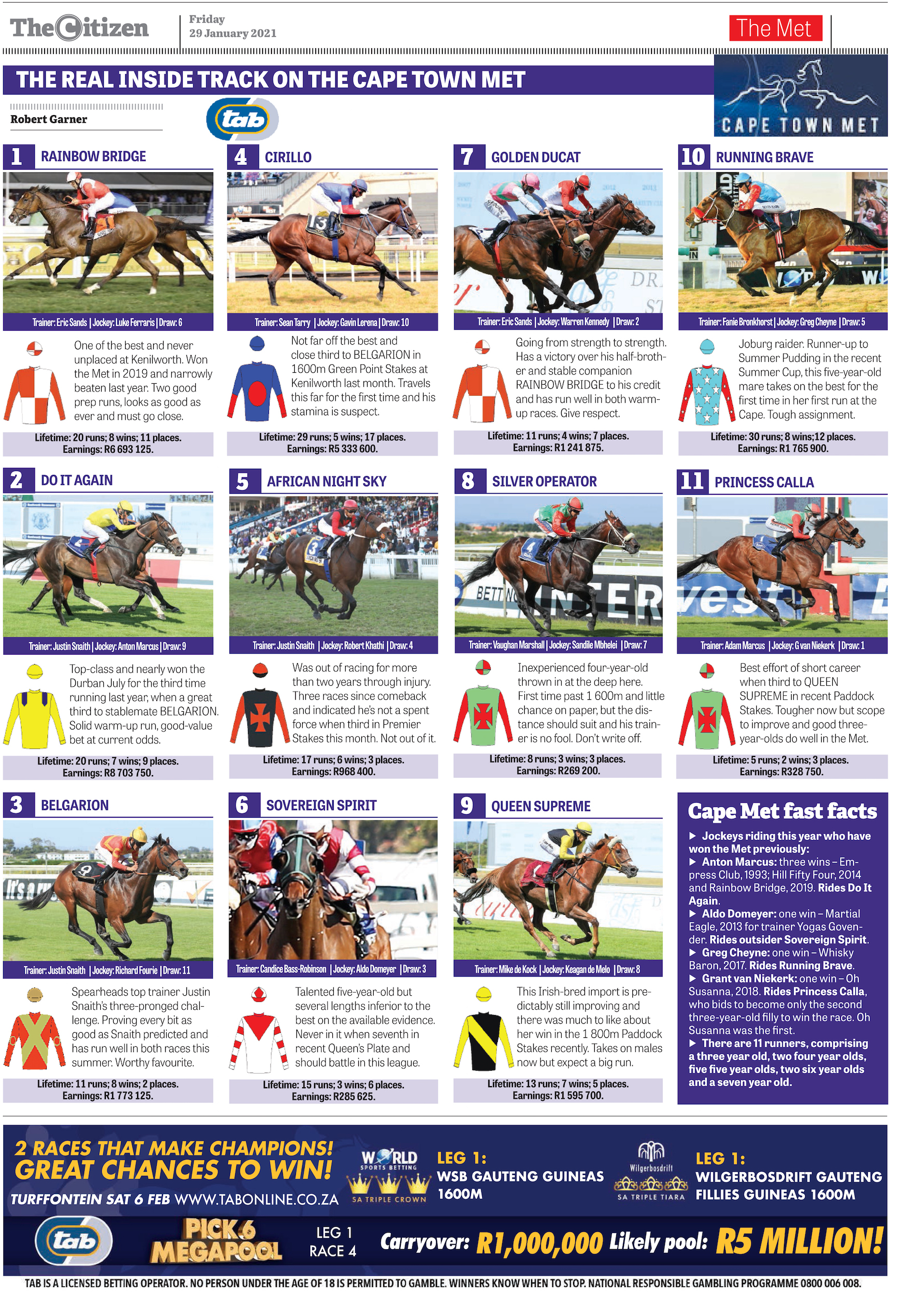 Snaith shrewdly raced Belgarion sparingly to ensure his charge came into last year’s Durban July with a light weight, and the gelding mowed down his rivals late to score a famous victory.

Belgarion’s two subsequent races have confirmed he’s right up there with the best and the confidence radiating from the Snaith yard about his prospects indicates he has come on plenty since those runs.

If that is the case, expect him to clean up this field with little fuss in the hands of stable jockey Richard Fourie.

But it’s hard to gloss over the result of last year’s July in which Do It Again, bidding for his third consecutive win in the race, put up a brilliant effort at the weights and finished a length behind in third.

Do It Again now meets stablemate Belgarion on 6.5kg better terms, which is more than enough for him to turn the tables if he brings his A-game to the Met.

That’s far from certain because the Met has not been a happy hunting ground for this flashy gelding.

But he can count on maximum assistance from 50-year-old jockey Anton Marcus, who is riding as well as ever.

At 6-1, he looks better value than Belgarion, while Rainbow Bridge, his half-brother stablemate Golden Ducat and Queen Supreme all have strong form.

Opt for Cirillo among the rank outsiders.