I am on my way to Cape Town today to ride Harry’s Son in the Grand Parade Cape Guineas. 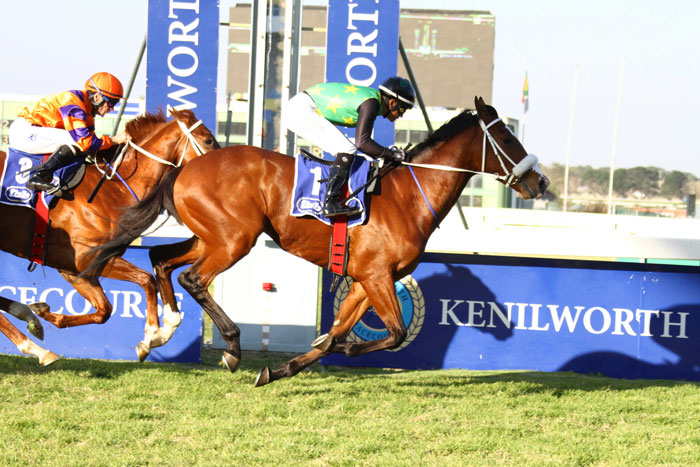 HARD TO BEAT. Act Of War is a top-class performer over the course and distance and is expected to win today's Grand Parade Cape Guineas over 1600m at Kenilworth. Picture: Supplied

On form there are a few horses who should fight it out.

Harry’s Son is one of the main contenders. The favourite is Act Of War and I could have ridden either of them. However, I committed to the connections of Harry’s Son some time ago and loyalty has prevailed even though I may not have picked the best of the pair for this specific situation.

Act Of War has been based in Cape Town and is used to the left-handed track. Harry’s Son had to twice travel to Joburg from Durban again to Cape Town to take on arguably the best three year-old colt in the country. In my opinion, It will be a very difficult task.

But going all the way to Cape Town is a mission so we obviously would love to get first prize. The connections have big plans for Harry Son, even a possible international campaign, but the conditions favour Act Of War this time and I see him as banker in all bets.

One of my rides is Readytogorightnow who I rode last time. The stable didn’t seem too happy that he raced handy and I will probably end up riding him from the back. Since he has the worst of the draws I might end up too far back which could make it difficult to win.

The last couple of months have been really good and I now have negotiated a new sponsor in the form of Wildekrans Boutique Wine Estate. They are a wine farm based in Hermanus and are also involved with the Sharks rugby team.

I was quite impressed with the wine they are producing currently and naturally I will be fully stocked with their product in the forthcoming months. I’m looking forward to a long a fruitful relationship. There are other plans in the pipeline as well, and I’m hoping we will go from strength to strength.

I know it is still early days but it seems like racing could really benefit from Wildekrans coming into the game.

Sunday we have the meeting at Turffontein with racing taking place on the standside track.

My first ride comes up in Race 2 on Not Sulking. She’s got definite ability but she’s run over further and is coming off a rest. She could race fresh and surprise although the obviously horse here is Carry On Alice who should be a certainty in this field.

Race 3 seems a two-horse affair between Beach In A Bottle and Corleoni. Those are my two for the Place Accumulator.

In Race 5 there are a lot of horses with exposed form and none of these looks to be heading for Hollywood. That’s why I think Karoo Breeze, who has only had one start for one win, could end up beating this type of field. The dangers could be Delighted and Danielle but they have had many chances. I’m on Ride Of Honour who has done nothing since winning her maiden and could possibly be better around the turn.

As a result we will take a chance and banker Karoo Breeze in all bets.

Race 6 looks a two-horse race between Lockheed Jetstar and Bouclette Top. You can bank either in the Place Accumulator and for the Pick 6 both will suffice. I’m riding Sabadel but I my first instinct was to get the ride on Lockheed Jetstar and when I couldn’t get that I tried for Bouclette Top. So in the end I had to take the next best ride. I’m hoping to beat the other two so their connections realise they should have put me on the one or the other in the first place.

In Race 7 I will banker Modern Muse in all bets. There are a lot of exposed horses in this event and the fact he has the strongest form and drawn No 1 will make him very hard to beat.

If you feel he is not a banker then consider Silent Force and Lemon Tea, but both have a bad draw. Another horse I’ve been following is Catch A Thief

Race 8 looks a two-horse race between Kingmambo’s Legacy and Cool Chardonnay. I tried to get the ride on the latter but failed. You can banker either in the PA and go for both in the Pick 6. If you want to go further consider Epic Tale and What A Boytjie.

I’m riding Petrichor. He looks well held and, as mentioned, was not my first option in this race.

Race 9 once again looks a two-horse race. The horse I tried to ride was Mountain Master. He didn’t seem to enjoy the very soft track last time and as he now has a good draw and has competed against stronger he must be a huge runner. He is at 8-1 and is my value bet of the day.

The danger is Illuminati. He is young horses who has competed against the best in the country and could do very well win in this field. I would put those two into the PA and for the Pick 6 I would include improver Thatho Magestique.

I’m riding Henry Higgins but even though he should have some sort of chance I think the others mentioned have stronger form.

The 10th race looks quite competitive but Mike de Kock has a horse who has won well in his only start in Ertijaal and he is the obvious horse to beat. I’m riding Super Glue. Unfortunately he also has a bad draw but he’s run against some top horses in the past.

For Places and Quartets include Roman Ridge. Last time he had a bad draw and was caught in the bad going for much of the race.