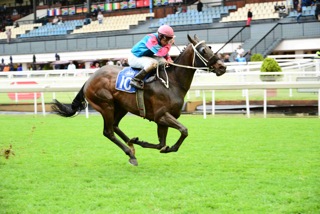 TOP PERFORMER. Judicial can further improve on his Sansui Summer Cup performance when he contests the Grade 3 London News Stakes over 1800m at Turffontein.

There were some punters who were surprised when Judicial ran third in the Sansui Summer Cup but those who listened to trainer Tyrone Zackey when he said his charge was “the best place bet on the card”, laughed all the way to the bank.

A race prior to that Judicial won the Grade 2 Victory Moon Stakes but as that was run in pouring rain many pundits wrote it off as a freak victory by a mud lark. In the Summer Cup the son of Miesque’s Approval ran on well to finish three lengths behind Louis The King with Killua Castle separating the pair.

On Sunday Judicial lines up in the Grade 3 London News Stakes over 1800m on the inside track at Turffontein and will renew rivalry with Killua Castle. Based on their Summer Cup performance Geoff Woodruff’s charge should again finish ahead of Judicial as he is 1.5kg better off, but the early pace in the Summer Cup was not all that quick and would have suited Killua Castle more than Judicial. Both were badly drawn but this time Judicial has the benefit of No 2 barrier position. He has only had one run on the track and that was in October 2013 but Judicial did well enough to finish a 0.75-length second behind London Irish.

Karl Zechner, who rode him in both the Victory Moon and Summer Cup, is back aboard.

Killua Castle stands out as the obvious danger and must be respected. His 0.25-length second behind Louis The King was an outstanding effort but one that probably surprised even Woodruff himself. He has raced three times at this course for one win and a fourth placing. His victory was over 1200m on debut when he touched off Distinctly by a head.

He runs well for Akash Aucharuz but one has to take into account Killua Castle was beaten 13 lengths by Judicial in the Victory Moon in heavy going and based on the weather reports for the next few days there is likely to be a lot of give in the ground.

Piere Strydom and Weichong Marwing have produced some exciting finishes over the past few months and they could fight out third spot with Sabadell and Eurakilon respectively. Sabadell had 1.80 lengths to spare over Ormond Ferraris’ charge last time but with a 1.5kg turnaround it could go either way.

Last year Louis The King staked his claim as a top three-year-old by winning the Listed Sea Cottage Stakes over 1800m and Mike de Kock-trained Ertijaal will be looking to emulate the feat this year. He has been an impressive winner of both his starts and would be a confident selection but for the fact he jumps from barrier No 12.

French Navy, who is the best weighted runner and the main danger on paper, fared even worse and he is drawn No 13.

The only real threat to the pair looks to be Fah Fee. Ferraris’ charge beat Dingaans winner Unparalleled in his last win but there is a question as to whether he will see out 1800m.