Teenagers are a handful, one minute cheeky and playful and the next trying to be adult and assertive. Three-year-old Ertijaal, the newest equine star in the Mike de Kock stable, is just like any other teenager but with one big difference. When he wants to be boss, he gets to be boss – after all he is powerful and weighs around 500kg! 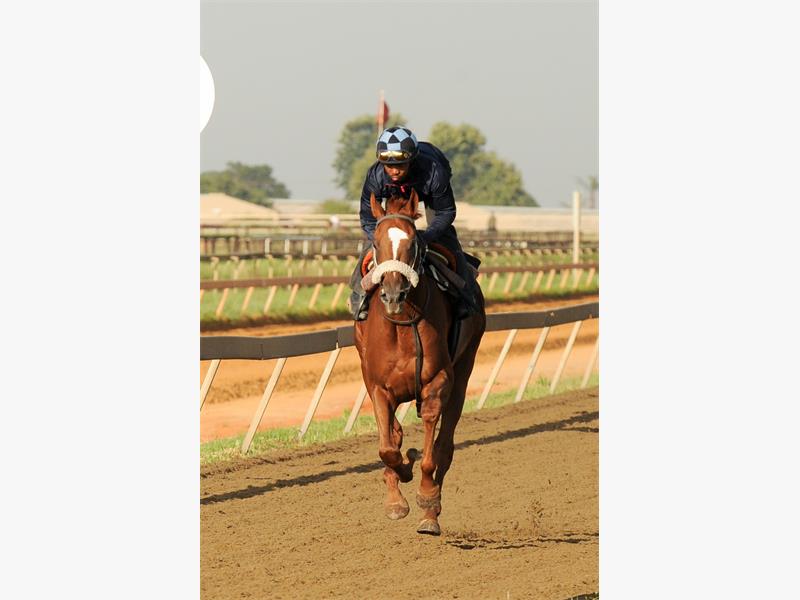 “He’s a character,” says Mathew de Kock, assistant trainer for his father, Mike. “He’s always fresh and on his toes and nibbles you all the time. It’s not malicious. It’s his way of showing affection. But we still have to keep an eye out because even a little nip from his baby teeth is sore.”

The stable’s relaxed attitude towards their horses’ mental and emotional health, as well as their strict routines on the training tracks, makes them thrive and the reward has been a large number of great racehorses, including Igugu, Greys Inn, the late Horse Chestnut and Ilha Da Vitoria.

They all won big races on Classic Day, one of the major racedays in South Africa, and Ertijaal is set to follow in their footsteps Saturday when he rans in the R2 million SA Classic at Turffontein.

The colt, homebred by Shadwell Stud in Australia, was sent to De Kock by Sheikh Hamdan and his racing manager Angus Gold.

Ertijaal arrived in South Africa having just turned two in August 2013. “When he stepped off the float he had all the right qualities of a top horse. He was big, had a strong, deep girth (chest) and a fighting attitude.”

Then he got colic and had to have an operation to untangle his intestines. “He was gravely ill and came out of surgery looking like half the horse he was. But given three to four months to recuperate he grew back into himself and became cheeky and playful again.”

He was sent to Durban because De Kock’s yard there had paddocks for him to romp in and also to avoid the harsh Highveld winter. He thrived and when he was brought back into full training it was soon obvious he had the ability and was expected to win his first race, in November last year.

“He didn’t know the score, but when he came into the straight, Anthony Delpech gave him one smack to get his mind on the job and he took off.”

De Kock chuckled: “They were so impressed they sent him straight up to join the first string in Joburg.

“When he got home, he’d grown into a man. We worked him alongside a few of our more decent horses to see what was there and he played with them, kind of like a boxer sparring with his partner.

“Just like any teenage boy he does just enough work and no more. But he’s a natural and became a professional after just one lesson.”

Less than a month later, with his dad in Dubai overseeing the international string, De Kock sent Ertijaal into battle again. That was the day he hooked up with jockey Gavin Lerena. Delpech was due to ride but broke a leg in a fall. De Kock then gave the ride to Randall Simons, who hurt his back and also had to take a break.

Lerena was available and a strong bond was instantly forged between jockey and horse with Ertijaal going on to win by a wide margin.

“I was very confident but the win was much better than I expected,” said De Kock.

“We knew then that we had something special on our hands and started making plans to run him in the Cape Derby.

“He didn’t take that run well and missed 12 days work. But we had to make sure taking him to Cape Town was viable, so he had to run in the Sea Cottage Stakes three weeks later even though he was still a bit flat.”

It’s history now that he beat Deputy Jud, one of his rivals in today’s SA Classic, and they knew then he was a Cape Derby prospect. It still wasn’t a given he would justify their faith in the Cape Derby and De Kock approached the race with some trepidation even though he knew it would take a really good horse to beat Ertijaal.

“There was a lot of talk beforehand about Act Of War being the next best thing. We came in as underdogs.”

Ertijaal took the 18-hour float journey to Cape Town in his stride and De Kock and Lerena discussed tactics in depth before the race, planning to go to the front to make sure the stamina of his rivals was tested to the full.

Everything went according to the script. Ertijaal easily got to the front, was a long way ahead halfway down the straight and won with his ears pricked by 4.75 lengths from Act Of War.

De Kock says while Ertijaal’s main target now is the SA Derby on Champions Day next month, his runner is forward enough to give a good showing today.

He also believes even though 1 800 metres might be a bit short, Ertijaal’s athleticism and will to win will carry him through.