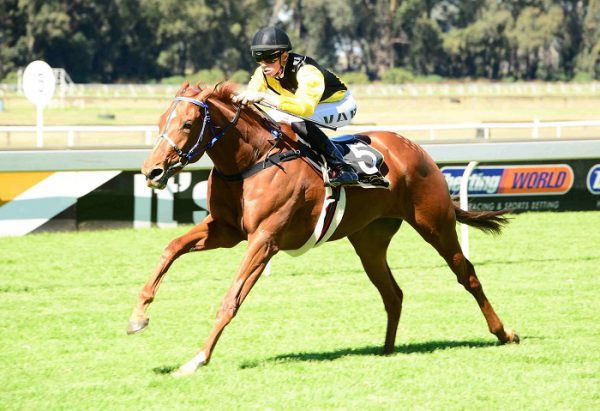 READY TO WIN. Silver Thursday has had a warm-up race and should be fit enough to win Race 7 at Turffontein today. Picture: JC Photographics

Rate of improvement differs from horse to horse and distance to distance. As they get stronger over time and they tend to build more stamina which is why when they are young they battle to win over distance. Often I see young horses given weights of 60kg and more that is when they tend to get beaten.

The other reason why it is difficult to find winners right now is because you have talented horses coming out who are having their first runs off a rest so their fitness is not 100%.

The problem lies with the fact we are uncertain how fit a horse may be. Often a trainer might think his horse is ready for a race but then discovers there is nothing like a race to test a horse’s fitness.

Often those who have had a couple of runs and are race fit beat a more talented horse which makes it difficult to make any confident selections.

I try to get the best rides but there are times I have to make a call and just hope my horse is fit and well. I ride horses who at best would not be without a chance.

But as some races are used as a stepping stone to better things I have to look at the bigger picture and maybe sacrifice a smaller win for a feature race prospect.

Today we race at Turffontein on the Inside track and Race 1 is for work riders. One should be able to make a profit on Ossetra and you could make a few rand to spend on the rest of the meeting. The dangers are the two Dynasty fillies – Sabina and African.

Race 2 is a Plate race which favours the best handicapped horses but this time I will lean towards Dalley as my first selection. The main danger is probably Angelic Appeal. The unknown runner is Cavalleria who won her last start by a street, although it was in the maidens.

For the BiPot include Dalley with one of the other two mentioned.

I ride AP’s Lily who is held on her latest run but on some of her earlier efforts she could run into the money.

Race 3 is a Maiden Plate with none of the runners having particularly strong form. My selections are Annie The Great, Aerobatic and Of The Moon.

Put all three in the Place Accumulator but as their form is not particularly strong include any first-timers who attract betting support.

Race 4 is another weak Maiden Plate and one horse who stands out on form is Mutawaary. However, last time he was beaten quite a long way and now, after sprinting, is trying 1800m for the first time.

As it is unsure whether he will stay you will still have to include Plucky Plunder and London Fog.

Those three should also be good enough for the Pick 6 otherwise you will need the field.

I ride Collegiate who is an unraced five-year-old maiden so I don’t know what to expect. Trainer Tyrone Zackey did offer me the ride so hopefully he is positive about the horse’s chances.

Race 5 is a very competitive handicap which has now been reduced from 2000m to 1800m. Every horse has a winning chance and it will be difficult to leave out any runners for the Pick 6.

For the Pick 6 go with the field but for the PA go with Hidden Agenda, Kilrain and Bankable Teddy.

If you don’t want to take the field in the Pick 6 then add Killua Castle, Top Shot and Lee’s Pick to the three in the PA.

Race 6 is a very competitive race for these young three-year-olds but on current form and fitness Broadway Trip and Flying Free could be the main contenders.

Those are my two for the PA and for the Pick 6 add in two who are coming off rests and could improve – Warrior’s Rest and Hakeem.

Race 7 is a Progress Plate for three-year-old fillies and my first choice is Silver Thursday. She ran second last time after a rest which arguably could make her one of the fittest horses in the race.

The two unknown who could improve are Varsity Girl and Raven Girl. Others with decent form but are coming off rests are Aurelia Cotta, Dame Kelly and Let It Flow.

I’m riding Let It Flow who has some decent form but has not raced since July and could be in need of the run.

For the PA we will go with Silver Thursday, Varsity Girl and Raven Girl and add the others mentioned into the Pick 6. These are young three-year-old fillies and they could improve a lot so any horse could actually win.

Most of the top rated horses are coming off a long rest so maybe for the PA the main horses should be Shukamisa and Romi’s Boy but it is a concern whether Romi’s Boy will stay 1600m, especially as he is quite a strong horse to restrain.

For the PA you could take a chance and banker Shukamisa otherwise you have to consider the others mentioned.

For the Pick 6 either go with these four of stick in the field.

I ride Samurai Blade who if fit enough and is able to produce his best form, he could run into the placings.

Race 9 is a fillies’ handicap and once again it is very competitive. Just about every horse has a winning chance and therefore one needs to take the course-and-distance into account and go where the draw is a huge advantage.

Therefore selections are Best Kept Secret, Onamission and One Dimension. Take those three for the PA but for the Pick 6 most have similar form and if they overcome the draw and win this race. If you look past those then put the field in.

I ride Comme-Ci-Comme-Ca who could find this 1200m too short but thankfully has a good draw.

In Race 10 we have two young horses in Flying Fable and Awaafy who both won second time out and either could win this race.

However, they have not run for a while and therefore my value pick is Fish River Canyon who is in form, as she won her last start and is drawn No 1.