The text messages were widely shared on social media, with many deeming the replies by the owner rude. Media personality Anele Mdoda did not hold back on Tuesday by exposing a spa company owner that ‘arrogantly’ did not assist an employee’s request on the feedback of her Unemployment Insurance Fund (UIF) application.

In a now-removed Facebook post, Mdoda said Aronia Day Spa in Houghton, which she has been a client before is not paying its staff their UIF.

Commenting on her initial Facebook post about the dispute, which was later removed, Anele said: “You can report me but the point has been made and now we know the type of person who owns that spa!!!”

Another celeb, Ricci-Lee Kalish behind Big Bad Wolf, shared screenshots of the conversation detailing the exchange.

The WhatsApp messages show the employee who tries to get answers from the spa owner on why they had not received any UIF payment.

The owner tells the employee to look for another job because there was no demand after they have reopened. Then the owner alleges that the employee was working part-time and that she had no answers for her. 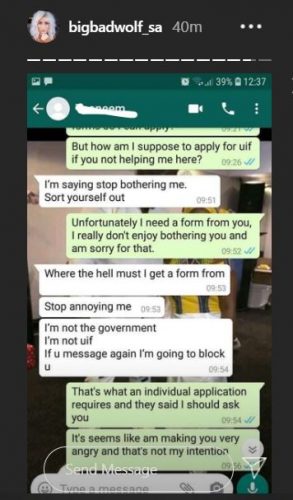 The text messages were widely shared on social media, with many deeming the replies by the owner rude, with some saying they would never set foot at the spa again.

Aronia Day Spa responded to the backlash in a statement: “As Aronia Spa, we wish to unreservedly apologise for the distress we caused our employee, who received the impression in a WhatsApp exchange that she had been wrongly dismissed and that her TERS payment was being withheld.”

The company acknowledged that the exchange from the owner was insensitive, saying they should have called the employee directly to explain the reasoning behind the delayed payment.

Adding that they have been severely impacted by the lockdown and applied for assistance through the labour department.

“Unfortunately, this matter is out of our control. Once the applications have been submitted, payment is done by the department of labour,” the statement read.