Beyond the fashion and the flair, South Africa needs more institutions like the Vodacom Durban July, even though 2021 may be somewhat muted. 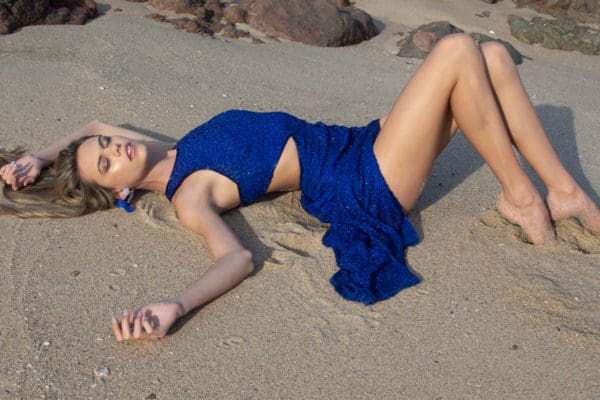 Swapping turf for the beach. Dressing up no matter what: While this weekend’s Vodacom Durban July is impacted by the Level 4 lockdown regulations, and approaching chill, it’s spirit and energy as a fashion forward, giant but turfy catwalk remains. Singer and model Nicci-Jean planned to join the who’s who at this year’s event but, since the announcement of restrictions, is left to enjoy the province’s golden beaches while she can. However, Nicci Jean decided to still dress up, get in front of the camera and turn the KwaZulu Natal shore into a catwalk. Nicci-Jean was styled by south coast stylist Tessa of Not Sheep. Picture: Sonette

Just a year shy of a century and a quarter, the Vodacom Durban July is one of the oldest and longest-running sporting events in South Africa.

The race, first run in 1897, has become an annual showcase of the finest in studs and fillies, both on the track and off-course.

This year’s the second instalment of the Durban institution that will be run in lockdown. And while you can still take a flutter on the runners, the glamour has somewhat faded into the pandemic. You can bet your bottom dollar though, after the Covid cup passes, the July will take its rightful place on the calendar.

The build-up to the July has always been a phenomenally exciting time in Durban. Almost every model in the city was booked to don a dress in the annual fashion parade, every wannabe rubbed shoulders with the who is who, few celebrities did not make the annual trek to the city of the Golden Mile to get photographed, posted, tagged and make the Sunday and Monday newspaper headlines.

The two months prior to the event, everyone crossed fingers and held thumbs to get an invite to the right marquee, from the right host or brand. Race-day saw the rich and famous making an entrance with helicopter shuttles toing and froing.

Even if you did not bet on any other horse race during the year, Greyville was abuzz with bookmakers and tote outlets, booklets explaining what a trifecta, a quarter or a straight bet on the pool was all about while bookie market movements were watched more intently than the JSE.

A lot of money gets won and lost at the July, and nothing is more fun than selecting a winner or a place position, standing on the sidelines and egging on the ponies.

With a bit of cash to gain or lose, sport becomes just a bit more exciting. And the Vodacom Durban July, the release. As the main race approached, like clockwork every year, the bustle to get close to the track was a bun fight of note. Dodging over the top headdress and beautiful outfits with high heels sinking into the turf, the order of the day.

YOU MIGHT ALSO LIKE: Durban July: Flood of bets for Do It Again to do it again

Vodacom Durban July fashion was something else. Nobody needed a wardrobe malfunction to show off more skin in the game than eye candy hunters could handle in a day.

Garb is all about the outlandish, the sublime, the ridiculous and the downright breathtaking. Models and celebrities, drawn to anyone with a camera like bees to a honeypot. Body painted designs, larger than life hats and sparkly dresses, slit to the hip or near-naked threads. Men in skins, suits, shiny waistcoats, tuxedos and shades, James-Bonding around the hospitality area. Anything goes, as long as you could draw a long bow back to the theme of the day.

But that is what makes race day so special. The effort that is made to create, to strut, to be anyone you want to be. No matter what the rest of life dished up and served, the July has always been the great escape.

Our Hollywood, our New York Fashion Week, albeit a muddy runway. Add to that the excitement of the races. It is a recipe not only for a great day out, for an opportunity to express ourselves and to be Holly-Bolly-or-Nollywood, but also just to celebrate a South African institution that has, to date, been untainted by politics.

South Africa needs more events like the Vodacom Durban July. Who will ever forget the feeling when the Bokke won the World Cup in 1995, 2007 and 2019?

Or in 1996 when Bafana Bafana beat Tunisia and become Afcon champions. When we hosted the World Cup in 2010 and nearly beat Mexico. When Charlize won the Oscar, when Prince Albert married a Benoni-girl or more recently, when My Octopus Teacher was recognized at the Academy Awards.

It is great to be South African, and the July is one of the few instances where we can all participate in, not just as spectators. Here, we become the stars, for a few precious hours.