How therapy is becoming the latest make-or-break dating demand

Women on social media have been extolling the virtues of good mental health in relationships with therapy becoming a major requirement. 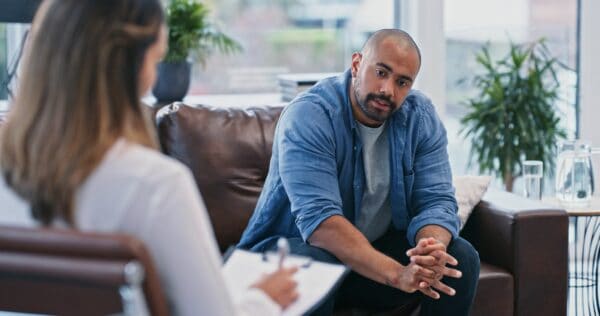 Some social media users say they want their partner to have seen a therapist, before they will consider starting a relationship with him | Picture: Shutterstock

When it comes to love, we all have our gold standards. Some of us look for a partner with the same hobbies as ours, while others seem to prefer partners who’ve been through therapy. The latter deal-breaker is proving particularly popular on social networks, where many (young) women extol the virtues of good mental health in relationships.

On dating applications, everything is a question of criteria, whether it’s age, height, professional situation, zodiac sign… or mental-health care. Many social media users now say that they want their partner to have seen a therapist before they will consider starting a relationship with them.

“All men should be required to go to therapy before pursuing a relationship with anyone lol,” said one Twitter user.

This new romantic requirement is particularly being echoed on TikTok, the social network of the young generations, where the #allmenneedtherapy hashtag has nearly six million views.

TikTokers often use it in videos where they list the behaviors or remarks that put them off a man. This approach is reminiscent of calling out “red flags,” akin to using red flags on Twitter to signal a problematic situation.

While some TikTok users use the #allmenneedtherapy hashtag seriously, others use it to humorous ends. Some of them show themselves whispering into their partner’s phone, repeating the word “therapy” several times over.

This is supposedly intended to influence the targeted ads that their other half will see appearing on the internet, thus boosting the number of those related to mental health.

This craze around men’s (and other people’s) mental health goes beyond social networks to dating sites and applications.

One of them, Hinge, announced in May that it would be rolling out a new feature that will allow users to talk more freely about their mental health and spark conversations surrounding self-care with the object(s) of their desire.

Users can now show on their profile how they would complete sentences such as “My friends ask me for advice about…”, “A boundary of mine is…”, “My self-care routine is…” or “My therapist would say I…”

For Logan Ury, director of relationship science at Hinge, this new feature shows how much today’s singles value their psychological wellbeing, as well as their partner’s.

“Talking about mental health has gone from an ‘oh no’ to a must-have in modern dating,” she said in a statement. “People have been working on themselves and want to be with someone who’s done the same.”

Hinge found that 97% of its users want to date someone who is “actively taking care” of their mental health. But only 9% are comfortable talking about their therapy on a first date.

While the dating app didn’t say what proportion of men are behind these statistics, it’s a safe bet that it’s not very large. Many studies have shown that men often neglect their mental health, especially if they are heterosexual. Indeed, heterosexual men are less likely to seek professional help for depression than homosexual and bisexual men, according to a 2016 study.

And the Covid-19 pandemic has only amplified this phenomenon, especially among young men. As such, it’s perhaps not surprising that some single women want their potential partners to follow their example and see a therapist.

“Shortly after I had been in therapy for a long time, I [realized that] before I had dated men who hadn’t really processed their trauma or experiences. I often felt I had to deal with the emotional brunt of it,” a 25-year-old woman in the UK told The Face.

However, many are aware that embarking on therapy is an extremely personal decision, and that it is not a miracle solution. And that doesn’t stop them having fun with the concept on social networks.