You can’t cage this Raptor

You might have seen them around Joburg. They are big, pimped out to the brim and have serious personality disorders. When these vehicles left Ford’s assembly line in Silverton, they were Rangers, but somewhere in between, they became “Raptors”. They normally feature a combination of a blacked out grille and front bumper, some LED headlight modification, a brawny air intake in the middle of the bonnet, extra-wide mountings on the wheel arches, held down by big bolts, mean looking wheels with chunky tyres and some form of art work on the rear body panels – announcing to the world that this is a Raptor.

That’s where the catch comes in. These imposters are not Raptors. A fireman’s son putting on his father’s work helmet does not make him a fireman and neither do these aftermarket chiselled cosmetics turn any guise of Ranger into a Raptor. 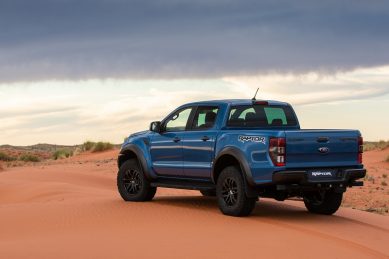 You see, our Ford mates over in Australia spent some serious cash on developing the real Raptor. The end result is not only a mean-looking machine, but also an extremely capable one, on any surface. It features a unique high-strength steel chassis with bespoke suspension and race-developed Fox shock absorbers with position-sensitive damping along with specially developed BF Goodrich 285/70 all-terrain tyres wrapped around 17-inch rims. And to assist the driver in making the most of the Raptor’s capabilities, the Terrain Management System (TMS) includes Baja mode, which was inspired by Mexico’s famous Baja Desert Rally. It enables ultra-responsive, high-speed off-road performance.

The other settings are similar to the 4×4 Everests and feature Normal, Sport, Grass/Gravel/Snow, Mud/Sand and Rock mode. We did not take our test unit for a spin on the dirt. Not that we didn’t want to, but because there is nothing left to prove after the vehicle’s official launch outside Upington last month, during which our Road Test Editor Mark Jones experienced first-hand just how beastly the machine can behave. 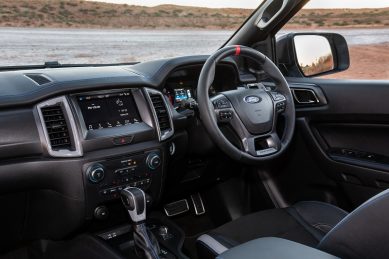 The Raptor handled all the challenges over the dusty pans and gravel road ramps with aplomb. In all the time we spend driving our test unit in the concrete jungle, we came to the conclusion that such an act should be considered cruelty towards cars and should be a criminal offence.

Have you ever seen those poor Formula One cars when they are following the pace car under the yellow flag? Despite the pace car being a stupidly fast production vehicle, the F1 monsters are suffering, and suffering badly. They are like spastic horses waiting to burst out of their stalls, have to criss-cross around the track to keep their tyres warm and run the risk of overheating at a “mere” 180km/h when their optimal cruising speed is well over 300km/h. Ditto for the Raptor. Sort of. It won’t overheat in bumper-to-bumper traffic on your way to work in the morning, but the bakkie will feel like a caged lion. For those purposes a CitiGolf’s suspension would do and you certainly wouldn’t need something that can drift and ramp at high speeds on dirt roads. But if you insist on being cruel, at least the Raptor is very comfortable – and safe, too. It is as nice inside as the top-specced Ranger Wildtrak, with a few added features, like technical suede for more grip on the front seats, which also feature blue stitching and leather accents, a steering wheel with perforated leather hand grip sections, a red 12 o’clock marker and magnesium paddle shifters. 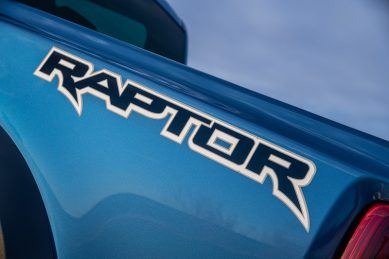 Safety wise, the Raptor is equipped with 332 x 32mm ventilated discs at front and 332 x 24mm at the rear. It also features Ford Stability Control which incorporates Roll Stability Control developed for Ford’s SUVs and adapted. Under the bonnet – that doesn’t have an elevated air intake – the Raptor features Ford’s new 2.0-litre bi-turbo diesel engine that delivers a maximum of 157kW of power and 500Nm of torque and is mated to the new 10-speed automatic gearbox, a combination similar to that in the new top-end Rangers and Everests.

If you are a farmer in a hurry or a weekend adrenaline junkie with a preference for bumpy, twisty gravel roads, the Raptor is perfect. But if the furthest you are prepared to wander off Sandton’s tarred surfaces is the pavement outside the Gautrain station, you have to seriously consider parting ways with R803 300. Rather save almost R200 000 and pimp out your Ranger XLT with some stickers and plastic.