Electrification is reportedly set to take centre stage in Nissan’s next generation of sports cars, but according to reports from Australia, only one of its iconic models would feature a hybrid powertrain initially.

According to motoring.com.au, the next GT-R will feature an electrified powerunit, which Yokohama’s Vice President of Global Product Strategy, Ivan Espinosa, has hinted could be derived from the system in the Ariya, whose all-electric all-wheel-drive system, e-4ORCE, is modelled on the current model’s ATTESA E-TS system.

He however stated that the chances of the GT-R going all-electric, despite the reported flexibility of the Ariya’s EV platform, won’t be happening quickly due to packing and weight concern related to the battery pack that could impact performance.

“There are two things about batteries still in the EV space, one is the size. We have a battery in the floor today but it’s still space you need to allocate for the battery. So when you go with the conventional sports car which you expect to have a very low drive, the packaging becomes a very challenging thing,” Espinosa said.

“The other is the weight. We are capable of tuning and delivering very exciting performance in Ariya, with the power we’re getting from the electric drivetrain, but still the weight is an element that cannot reach the level you would expect for a very dedicated and high-performance sports car. [The] technology is available and we’re learning a lot from our Formula E team, but it’s not yet at a level to put into such a car”.

Despite the current GT-R dating from 2007, the all-new so-called R36, according to the online publication, is not due until at least 2027 based on comments made last year by its Project Head, Hiroshi Tamura.

“We are still just at 12 years. This body construction I want to keep for as long as possible. Yes, R35 is long [in terms of age]. But for model year 2017 it is almost a new body shape. The body is technology,” he said. 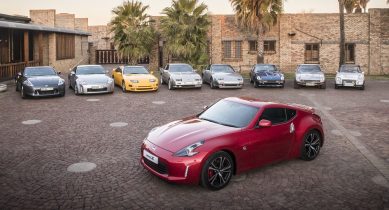 Meanwhile, Espinosa confirmed to caradvice.com.au that the replacement for the equally dated 370Z, slated to be called 400Z, is close to completion and will be revealed next year, but that while space exists for two powerunits, “in the short term you can still see … a bit more conventional technology coming”.

Teased as the centrepiece of Nissan’s product presentation clip two months ago, the 400Z, which report have also alleged could be called 480Z, will revert back to turbocharging and incorporate styling from the original Datsun 240Z and the iconic Z32 300ZX that bowed out 20 years ago as the final forced induced Z-car.

According to prior reports, the new Z will keep hold of the current FM-platform, six-speed manual gearbox as well as the optional seven-speed automatic, but eschew the 370Z’s normally aspirated 3.7-litre VQ37VHR V6 for the same twin-turbocharged VR30DDT 3.0-litre V6 as the Skyline, Infiniti Q50 and Q60.

Its name now denoting the power output and not displacement, the 400Z will produce 400 pferdestarke (PS) or 298 kW, and allegedly continue with the Z34 internal moniker as opposed to adopting the Z35 tag. In keeping with the changes, a new logo made its debut in March this year.

Despite not having seen yet in light of the mentioned video, don’t be surprised if more details, and possibly even spy images, are uncovered in the coming weeks and months.