Three years after rumours began, the V6 only 300-series has been revealed as the first brand-new Land Cruiser in 14 years. 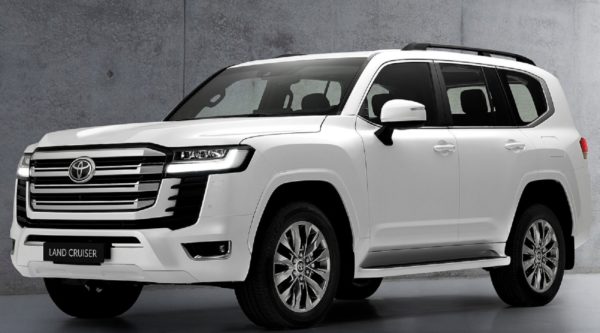 After three years and numerous speculative reports, the Land Cruiser 300 has finally been revealed.

UPDATED: Toyota South Africa has confirmed availability from August in entry-level GX-R and top spec ZX guise, the latter replacing the VX-R, and the GR Sport.

After close on three years since rumours began emerging, countless speculative reports, half a dozen delayed unveilings and more recently, a barrage of images on social media, Toyota has officially revealed the all-new Land Cruiser 300.

Celebrating 70 years since the original BJ bowed in 1951, the 300 replaces the 200 that had been in production for 14 years, one of the longest in Land Cruiser history, and debuts sporting a dramatic though more evolutionary design outside but a radical departure from its predecessor inside. 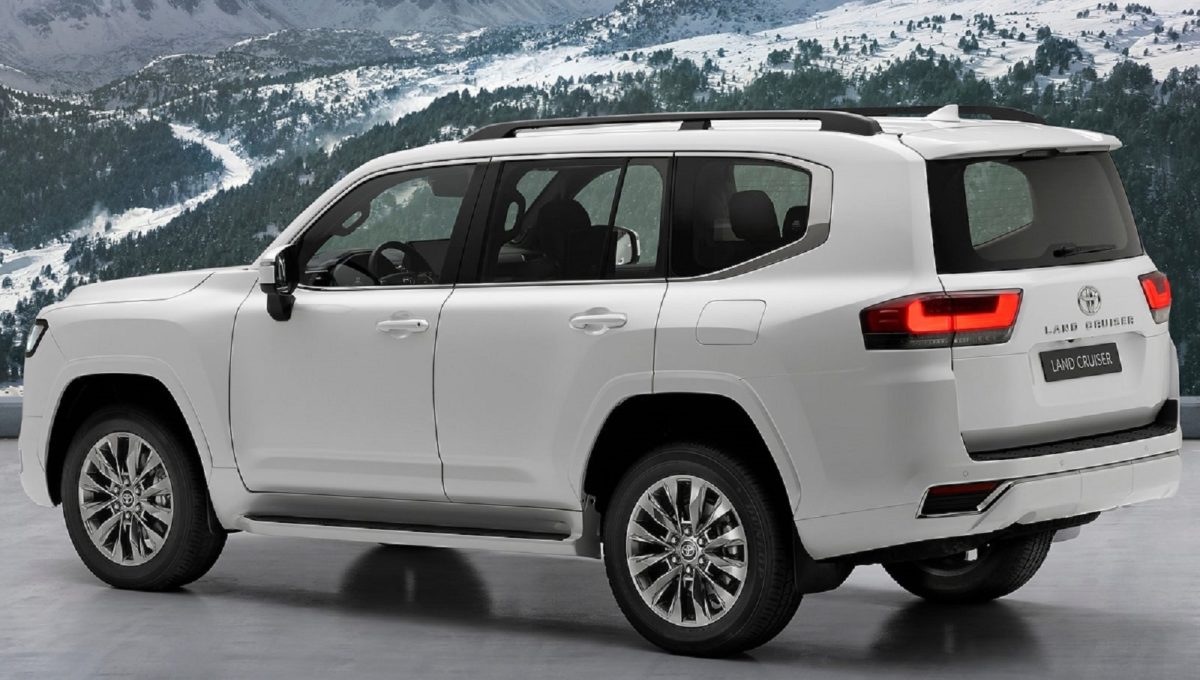 Rear has design traits of the Land Cruiser 200.

As is well known by now, the 300 moves to a brand-new body-on-frame version of the TNGA platform called GA-F, which will provide the foundation for not only the next generation Tundra currently undergoing testing in the United States, but reportedly also the all-new Hilux, Fortuner and Land Cruiser Prado.

Designed from the ground up to be more rigid and lighter than the 200, the 300 tips the scales at a substantial 200 kg less in addition to being the first model equipped with Toyota’s new Electronic Kinetic Dynamic Suspension System or E-KDSS that is claimed to improve road holding regardless of the terrain.

Dimensionally, the 300 is unchanged from the 200 with the overall length stretching 4 990 mm, the wheelbase 2 850 mm and width 1 980 mm. The claimed ground clearance is also as is at 230 mm with the departure angle standing at 24 degrees and the approach at 32 degrees.

Inside, the wholly redesigned interior borrows from the Harrier and Venza in look and design, with centre stage going to the new 12.3-inch touchscreen infotainment that incorporates Apple CarPlay and Android Auto 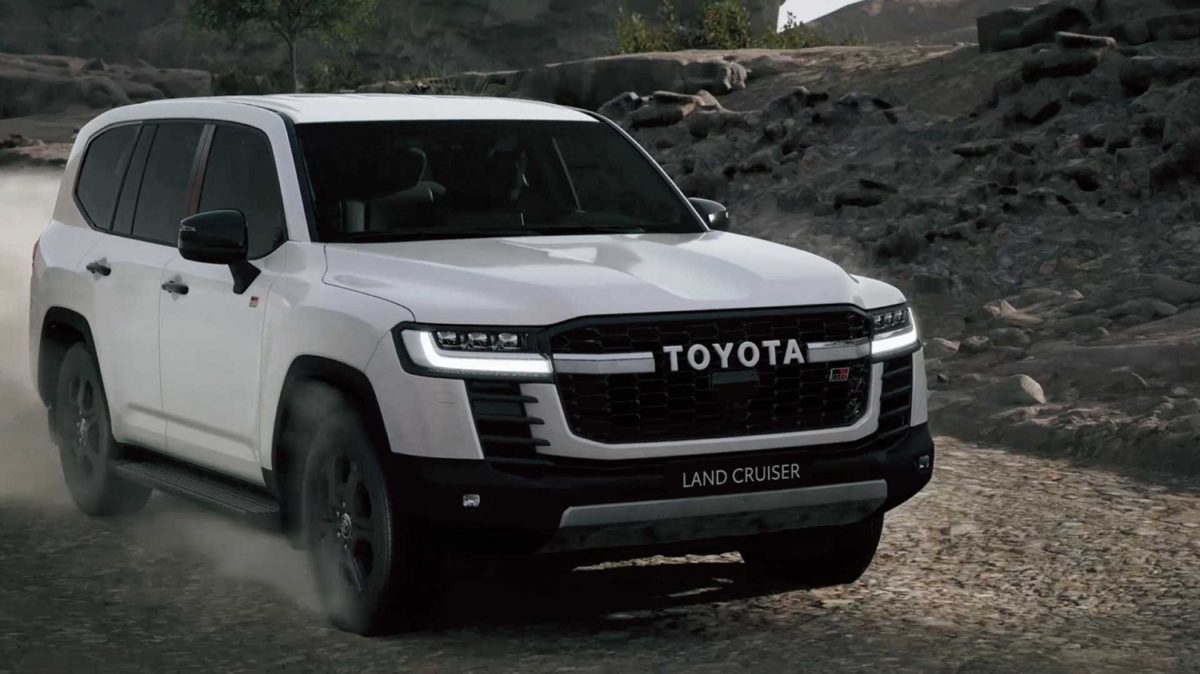 Of course, the biggest source of speculation for the last three years has been the engine options and contradicting reports of the inclusion of a V8. While reportedly on the cards for the Tundra, the Land Cruiser 300 will indeed be an all V6 affair with Toyota remaining tight-lipped for now about the hybrid model rumoured for introduction next year. 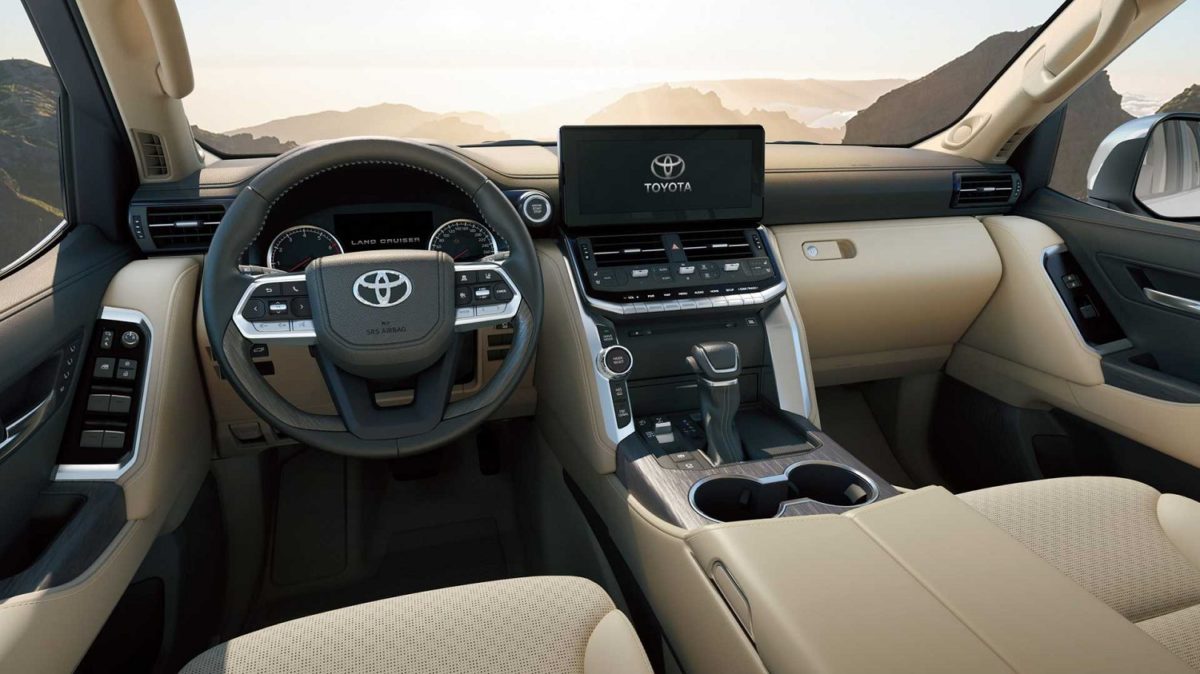 Interior represents a massive departure from the Land Cruiser 200.

As has been widely reported, the 4.7 and 5.7-litre V8 petrol engines in the 200 depart in favour of the 3.5-litre badged 3.4-litre twin-turbo V6 used in the Lexus LS 500, while the 4.5 D-4D bent-eight turbodiesel, which continues in single turbo form in the Land Cruiser 76/79, makes way for the brand-new 3.3-litre turbodiesel V6 developed by Toyota and not co-developed by Mazda as alleged earlier this year.

Although not officially detailed by Toyota, reports have claimed that the petrol will produce 305kW/650Nm, five kilowatts less but 50 Nm more than in the LS 500, and the diesel 227kW/700Nm, 32kW/50Nm more than the twin-turbo V8. Both are however paired to a brand-new ten-speed automatic gearbox with low range that replaces the old six-speed ‘box.

Not mentioned but teased was the GR Sport which dispenses with the chrome grille in favour of a black GR unit split by a TOYOTA logo bar and further equipped with a black front bumper and side steps, a satin silver front skidplate, black alloy wheels and black wheel arch cladding. 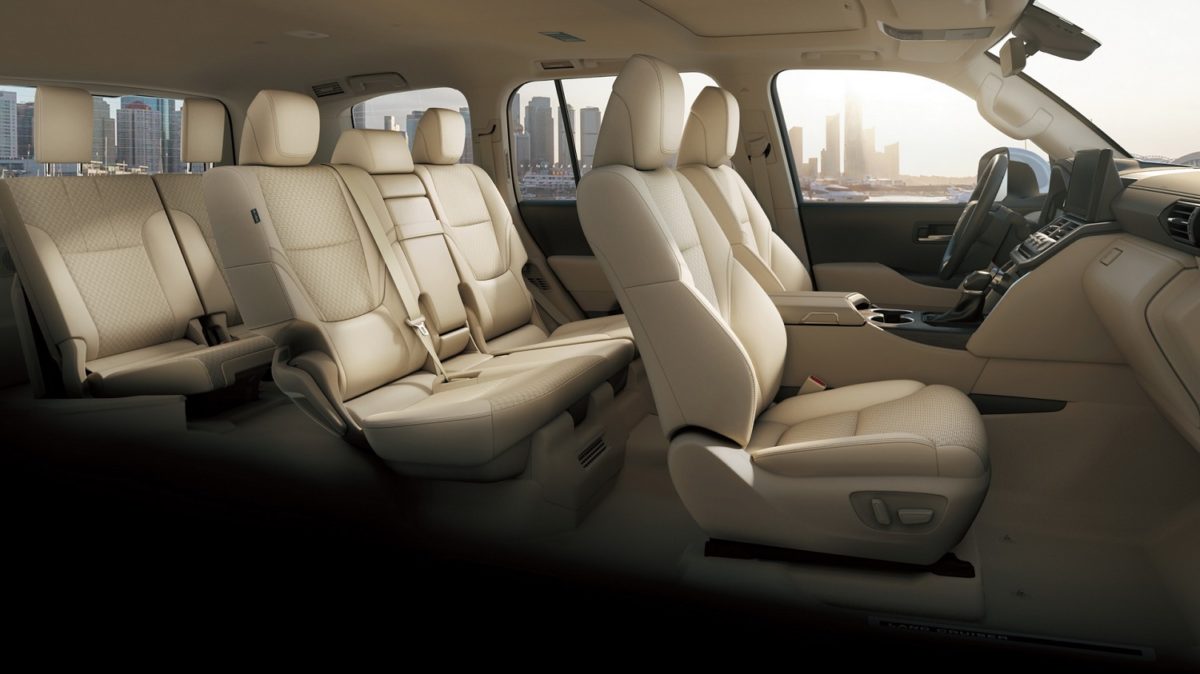 Seating for seven though certain markets will have an eight-seat option.

If a leaked presentation slide that originated within Toyota South Africa last month is to be believed, the GR Sport will not receive any added power and serve as a cosmetic overhaul similar to the Hilux GR Sport, although exact details are still to be confirmed.

Reportedly, the Land Cruiser 300, in accordance with the above mentioned document, will premiere on local shores next month initially only with the petrol engine as the GR Sport and diesel are touted for unveiling in September. Final details are anticipated to be announced within the coming days and weeks.