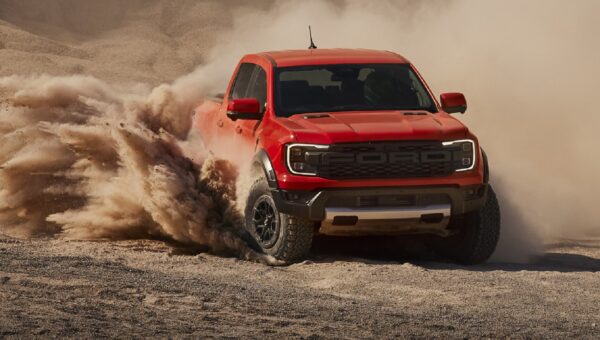 While still influenced by the Maverick, the Raptor sports a design more similar to the F-150 Raptor than ever before.

After an almost anonymous confirmation teaser buried within the reveal of the standard model last year, a comparatively short teaser campaign and numerous speculative reports, Ford has finally taken the covers off of the all-new, second generation Ranger Raptor.

One of the most eagerly awaited new models of the year, the Raptor, which the Blue Oval claims “rewrites the rulebook for off-road performance”, arrives as the most aggressive interpretation of any generation Ranger to date since the moniker replaced the Courier as a model of its own in North America 40 years ago.

Subjected to the same rigorous testing programme as its sibling, the Raptor, as hinted by not only the mentioned teaser, but also last month’s spy image, represents a significant departure from the outgoing model both inside outside and underneath.

Aesthetically, the trademark block letter F-O-R-D lettering on the grille remains, though incrementally more spaced-out and underscored by a smaller bumper with an integrated 2.3-inch steel bash-plate.

Inside, the Raptor’s interior dramatically differs from that of the outgoing model in both look and design.

Lifted from the Wildtrak, the tablet-like twelve-inch touchscreen infotainment system with SYNC 4 software comes as standard, along with the 12.4-inch digital instrument cluster, though resplendent with graphics and readouts bespoke to the Raptor.

Not shared with the Wildtrak or any other model, additional unique touches inside include Code Orange (a colour from the Bronco Raptor) accents on the dashboard and new steering wheel, cast magnesium gear shift paddles, a Raptor first ambient lighting system and new sport seats said to have been inspired by the F-22 Raptor fighter jet.

The biggest change from the current Raptor however resides underneath where the already high-tech chassis has been reinforced and the frame itself revised to cope with not only the various terrain, but also the new powerunit up front.

A characteristic of the previous Raptor, the Fox Racing dampers complete the suspension transformation, albeit with considerable changes.

Compared to the original position sensitive damping system, the new Live Valve configuration still monitor the terrain and conditions via a series of sensors, although now with better damping and absorption thanks to the shocks being filled with a Teflon-infused oil Ford claims reduces friction by 50% compared to the outgoing Raptor.

Developed specifically for the Raptor by Fox and Ford Performance, the dampers also features what the former firm calls bottom-out control whereby the damping force is increased in the remaining 25% of the shock to maximum.

Somewhat surprisingly, no details regarding ground clearance was made, with the same applying to breakover, approach and departure angles.

Also tweaked, the Terrain Management System now comes with seven modes that adjust the throttle response, gearbox, steering, traction control and even display within the instrument cluster and on the infotainment system.

They include the default Normal, Slippery, Sport, Sand, Mud/Ruts, Rock Crawl that can only be selected when in low-range, and a revised Baja setting.

For the first time, Ford has also developed a unique exhaust system that uses electronics, plus a pair of valves within the pipes, to provide a bespoke soundtrack depending on the mode selected. Activated by a button on a steering wheel, four settings are offered; Quiet, Normal, Sport and Baja.

One of the giveaway factors that immediately attracted attention during the teaser video, the presence of the exhaust system’s soundtrack at full chat elicited a change of powerunit from diesel to petrol.

While certain markets will continue with a revised version of the existing 2.0-litre Panther bi-turbodiesel engine from next year, the standard unit sees the Raptor switch to six-cylinder power, more specifically, and in accordance with previous rumours, the twin-turbo 3.0 EcoBoost V6 used in Explorer ST and the recently revealed Bronco Raptor.

Said to have been as a result of customer demand, the V6 is mated to a recalibrated version of the General Motors co-developed ten-speed automatic gearbox, and thanks to the added inclusion of an anti-lag system that keeps the turbos spooled for three seconds after throttle lift-off, produces 292kW/583Nm.

Down eight kilowatts but up 20 Nm on the Bronco and Explorer, the V6 delivers a considerable 135 kW more than the oil-burner with torque going up by 63 Nm. According to Ford, the uptake has resulted in the Raptor being a full minute faster over 10 km during testing than the bi-turbodiesel.

No performance figures were divulged with Dearborn also confirming that the 3.0-litre turbodiesel V6 bound for the standard Ranger won’t be offered as it was never considered as an option to the EcoBoost or a replacement for the bi-turbodiesel.

While market specification and roll-out is set to commence from later this year, what is known that the Raptor, unlike the standard Ranger, will no longer be manufactuered at Ford’s Silverton Plant outside Pretoria.

Instead, the mostly Australian developed and tuned newcomer will be imported from the Rayong Plant in Thailand, more than likely as a means of easing pressure on Silverton where the Ranger will be produced alongside the incoming new Everest as well as the all-new Volkswagen Amarok.

For now though, details regarding pricing or availability is unknown, but expect an announcement within the coming months. 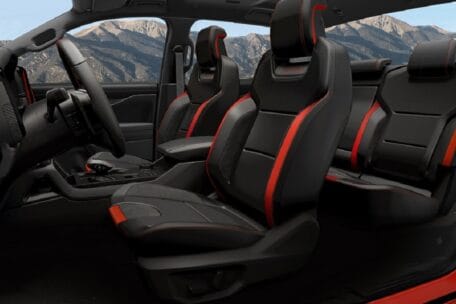 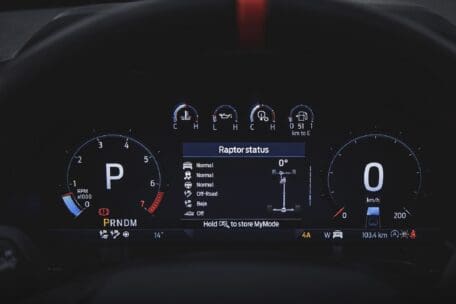 2/3
A total of seven driving modes are now offered. 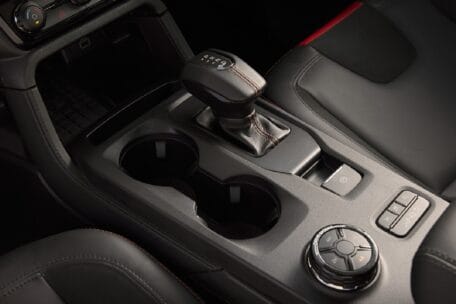 3/3
10-speed automatic gearbox has been recalibrated and the bulky gear lever replaced.