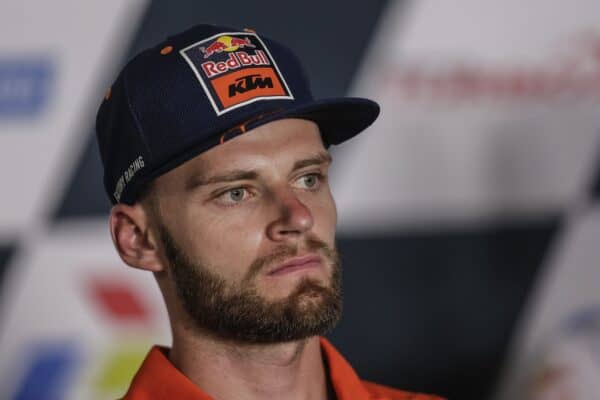 Brad Binder has his eye firmly on the MotoGP world championship lead, after securing second place in the overall standings at the Argentina Grand Prix on Sunday.

Binder earned 10 points for finishing in sixth place in the race to move up to 38 points. He trails new leader and winner in Argentina Aleix Espargaro by seven points.

The Spanish rider made history at the Termas de Rio Honda by becoming the first Aprilia rider to win a MotoGP race by breaking his duck in the 200th premier class start of his career.

Enea Bastianini, who led after the season’s first two races, is joint third with Alex Rins on 36 points.
An incredible nine different riders have stood on the podium during the first three races in Qatar, Indonesia and Argentina, justifying why this season has been dubbed one of the most unpredictable ever.

And there are still all of 18 races to go.

Binder, who finished second and eighth in the season’s first two races, made up five places in Argentina after starting in 11th place. Teams had less time than usual to prepare for the race, after flights carrying crucial equipment were delayed and the race weekend had to be shortened by 24 hours.

“Hats-off to the team because it was not an easy GP and we all did a great job considering we only had Saturday to prepare,” said Binder.

“It was a weekend where I expected more, but we have to keep in mind that we started in 11th position and managed sixth, so it was a decent comeback. I wanted more and I expected more but I didn’t have the pace today.

“We have some good points in the bag and brought the bike home again,” added the 2016 Moto3 world champion.

Both Binder and Red Bull KTM team manager Francesco Guidotti have vowed to come back stronger at the Grand Prix of the Americas on Sunday (10 April).

“Brad was very consistent to regain ground. His condition was very good, especially because he was in close company for a long time,” said Guidotti.

The Yamaha rider did make up five places after starting the race from 23rd place on the grid.