MotoGP star adds his voice to that of F1 drivers calling for top tier racing to return to South Africa. 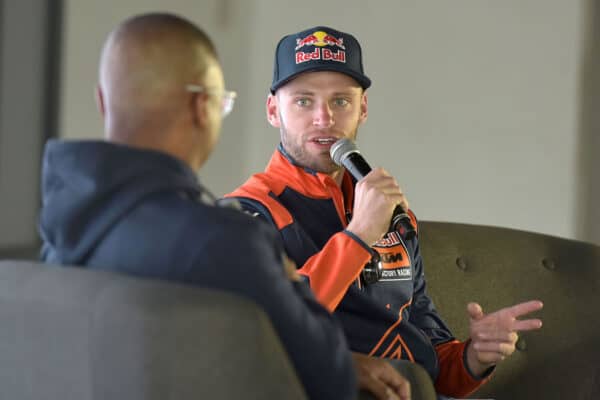 Red Bull KTM MotoGP rider Brad Binder speaks to the media before taking on the Kyalami Grand Prix Circuit in an attempt to set a new lap record during his Superlap event on 13 July 2022. Picture: Neil McCartney / The Citizen

Numerous F1 drivers have expressed their desire to race at the historic track amid persistent rumours that South Africa will next year return to the F1 calendar after a 30-year hiatus. They include seven-time world champion Lewis Hamilton, current world champion Max Verstappen and his Red Bull team-mate Sergio Perez.

Speaking at a publicity event at Kyalami organised by his Red Bull KTM team’s title sponsor, Binder said it would be “incredible” for South Africa to host its first F1 Grand Prix since 1993. He went one further in calling for Kyalami to also stage a MotoGP race.

“I believe it isn’t a done deal yet. But once it is finalised, I will definitely be here,” said Binder, who is taking a week off in South Africa during MotoGP’s five-week summer break.

“It will be incredible for the country. And further than that, for Kyalami itself and the whole of the racing community. Motor racing is huge in South Africa.”

The two-time MotoGP race winner and 2016 Moto3 world champion added he “would like nothing more than a home Grand Prix” on the motorcycling circuit. When South Africa last hosted a MotoGP race – at Phakisa in the Free State in 2004 – Binder was only eight years old.

“It is something I am really pushing hard for. I would love to have a home Grand Prix, especially with home being just down the road,” says Binder, who hails from Potchefstroom.

“It is something I really look forward to and is something I believe will happen in future. The track is really amazing. For me personally it goes back to when I was a child and raced a 50[cc] here.”

Binder hailed the facilities at Kyalami, saying that its “more than what we have at most tracks” around the world. He rode a MotoGP bike for the first time at Kyalami on Wednesday in an effort to set the fastest lap on two wheels around the track.

“The only modifications they would need to make in order to host these races are to tweak some of the run-off areas. Probably at the bottom of Mineshaft and at turn two because of the straights leading up to them,” said Binder.

“It is not something that only affects Kyalami, but many other tracks. MotoGP is getting faster all the time and the FIA is constantly making sure that the tracks can keep up.”

It was last week reported that Kyalami has been included on the provisional F1 calendar for 2023.
Speculation grew even further when Perez during a social media feature along with Verstappen appears to confirm Kyalami’s inclusion.

The 4.529km Midrand circuit underwent significant upgrades after being bought by Porsche South Africa boss Toby Venter at an auction in 2014. It has since hosted the Kyalami 9-Hour race, which is part of the Intercontinental GT Challenge, three times since 2019.