Exterior design is more evolutionary with the same basic silhouette as the outgoing model, but with styling clearly derived from the ID.3. After a production run of almost 13 years, Volkswagen has officially unveiled the all-new Caddy ahead of its world debut in Geneva next month.

Touching down after a relatively short teaser campaign, the exterior design is more evolutionary with the same basic silhouette as the outgoing model, but with styling clearly derived from the ID.3 at the front in the form of the new headlights with optional LEDs and the thin grille.

In addition to the new lower honeycomb air intake, the rear conforms to the initial teasers released at the end of last year and sees the Caddy receiving vertical LED lights and a more expansive glass house. Flagship models meanwhile will also have the first time option of electric dual-sliding doors, a panoramic sunroof, an electric tailgate and up to 18-inch alloy wheels. 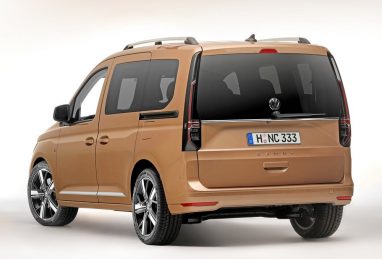 Revealing the interior as a drawing only, the Caddy, which will be offered in Cargo panel guise, as well as three lifestyle derivatives, base, Life and Style, will include tech such as keyless entry, a 6.5-or-ten-inch touchscreen infotainment system and an all-digital instrument cluster with the layout mirroring that of the Touareg’s Innovision Cockpit.

As before, standard short and long wheelbase Maxi models will feature with the latter able to accommodate two Euro pallets in Cargo guise. Depending on the mentioned trim level, the Caddy sees a dramatic overhaul in the safety department with 19 new features such as Travel Assist, Side Assist with Rear Traffic Alert and Trailer Assist.

Underneath its skin comes the biggest change with the PQ35 platform from the Golf V being dropped in favour of the ubiquitous MQB that has resulted in the fitting of the same engines as the eighth generation Golf. In this regard, the Caddy will be powered by two TDI engines fitted with dual SCR catalytic converters and double AdBlue injection that Volkswagen claims makes it the “cleanest diesel engines in the world”. 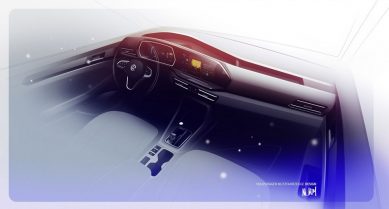 Outputting 55 kW or 90 kW, the displacement unknown oil-burners will be supplemented by an 84 kW TSI engine, as well as a supercharged TGI natural gas powerunit whose output was not been disclosed. No details regarding the 48-volt mild-hybrid eTSI engines or transmission options were made either.

Going on sale in Europe from July, the Caddy is expected to make its South African debut either towards the end of the year or in early 2021.