Easily one of the most anticipated new vehicle unveilings of the year, Ford, in the early hours of Friday morning (26 June), revealed the updated F-150 that will go on sale across North America later this year.

In spite of essentially being a facelift, the model is classified as the 14th generation version of the world and America’s best-selling new vehicle, with the Blue Oval billing it as a “standard’s raiser for all light-duty trucks”. 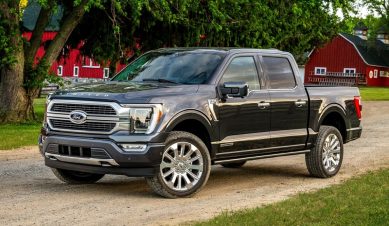 Claimed to be “the toughest F-150 ever”, the aluminium bodied pick-up receives a new grille with active shutters, of which there are 11 options, reshaped LED headlights, a redesigned front bumper with an active lower air dam, optional electric side steps, a selection of new colours and alloy wheels, plus new tailgate signage.

The most interesting rework though is on the inside where, apart from the new 12.3-inch touchscreen infotainment system with over-the-air updates, an optional ‘Interior Work Surface’ feature can be specified. In this form, the centre console comes with a flat surface allowing for a laptop to be positioned on a desk-like surface. 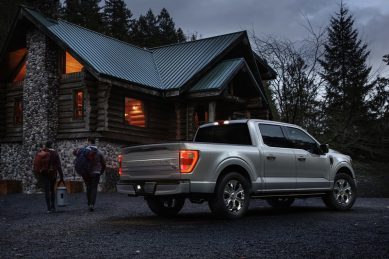 Although the F-150 retains a traditional gear lever as opposed to the rotary dial of the Ram, with the Work Surface option selected, it electrically folds into the console. New on the King Ranch, Platinum and Limited models are the so-called ‘Max Recline Seats’ which nearly fold 180 degrees flat while underneath the rear seats is a lockable storage area with divider.

Elsewhere, the more workhorse-spec XL and XLT come with an eight-inch touchscreen infotainment system as well as a four-inch TFT instrument cluster display, while the entire line-up boasts a new climate control display, upgraded materials and, on higher-end models, a choice of two digital instrument clusters that measure eight and twelve-inches. XLT models and up also come with an eight-speaker Bang & Olufsen sound system, which on the Lariat, King Ranch, Platinum and Limited can be upgraded by ten as an option. 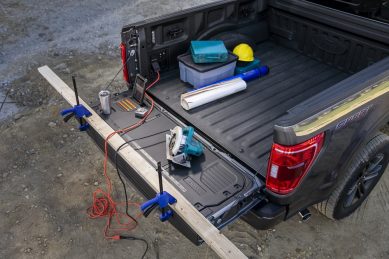 Arguably even more interesting than the interior is the F-150’s loadbay which features an integrated 2.0 kWh generator Ford has dubbed the ‘Pro Power Onboard’ system. Inclusive of inputs and two 120-volt outlets, the system becomes more advanced on the new hybrid model where the generator offers two options; the standard 2.4 kWh and optional 7.2 kWh with an additional two 120-volt outlets and a single 240-volt.

Mirroring the interior, the F-150’s tailgate can also be utilised as a work surface thanks to the ‘Tailgate Work Surface’ option which comes with cupholders, a mobile device holder, ruler and pencil holder embedded into the gate. 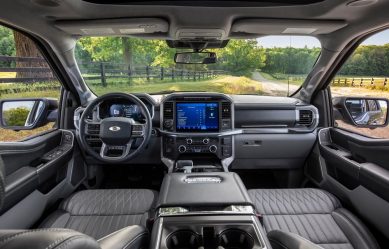 On the safety side, the Pre-Collision Assist with Automatic Emergency Braking and Pedestrian Detection system has been expanded to the XL with a new feature being Intersection Assist that will automatically apply the brakes when a turn is trying to be executed in front of an oncoming vehicle. Ford’s Active Past Assist 2.0 system also features on certain models.

As indicated, the F-150’s main highlight up front is a new hybrid powertrain that marries the existing 3.5 EcoBoost V6 engine with a 35 kW electric motor in a configuration Dearborn has dubbed PowerBoost. Claimed range on a single tank is 1 125 km with a towing capacity of 5 450 kg. 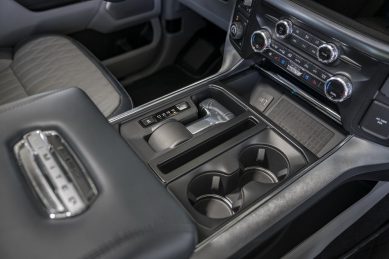 Apart from the General Motors co-developed ten-speed automatic gearbox, no further technical details were revealed, however, based on a recent leaked presentation slide, the F-150 will keep hold of the normally aspirated 3.3-litre V6, the 2.7 EcoBoost V6 and bigger 3.5 EcoBoost without hybrid assistance, the normally aspirated 5.0-litre V8 and the 3.0 Powerstroke V6 turbodiesel. The twin-turbocharged 3.5 EcoBoost in the Raptor is also set to continue.

In terms of spec, six trim levels will be offered; XL, XLT, Lariat, King Ranch, Platinum and Limited with pricing projected to start at $30 000 (R514 846). As before, three bodystyles will star, single, Super and Crew Cab with a choice of rear-or-four-wheel-drive. 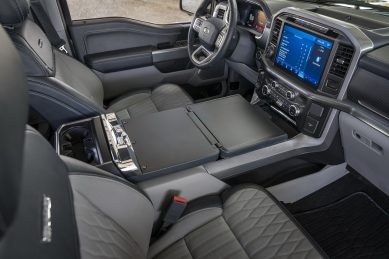 Although no plans are in place to make the F-150 available with right-hand-drive, despite numerous reports dating back nearly two years, Australia’s carexpert.com.au has obtained a presentation slide showing the F-150 and Bronco heading towards countries classified as IMG, which includes India, the Middle East, Thailand, Africa, Australia and New Zealand.

Ford’s Communications Head, Matt Moran, has however ruled out the F-150’s chance of heading Down Under when quizzed by the online publication, although pressure has continued to mount from Australia in wanting a right-hooking model to combat the success of the Walkinshaw Automotive converted Ram 1500. 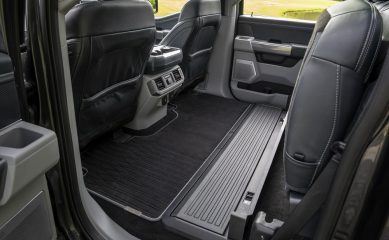 “We have continued, as we have for a number of years, to say that if there was a right-hand-drive (vehicle), then Australia, we believe, would be a good market for an F-150. We have a process at Ford which looks at where we believe our customers are, and where we believe our strengths will be. Commercial and trucks is clearly one of our strengths,” the Blue Oval’s President and CEO, Kay Hart, told carsguide.com.au back in March.