Petrol V6 remains but the much lamented CVT makes away for a new nine-speed automatic. 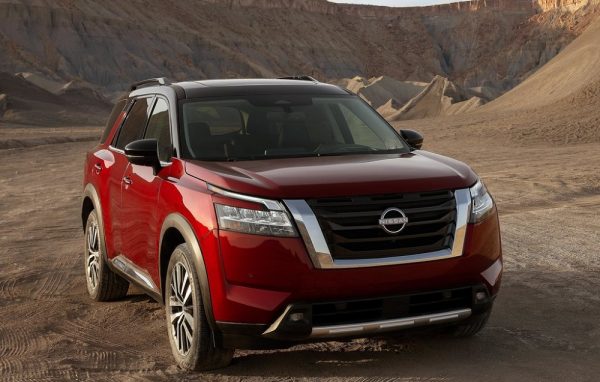 Having received extensive backlash, mainly in North America, since replacing the body-on-frame R51 with the unibody R52 in 2013, which quickly became known as the Mallfinder, Nissan has backed the reveal of the all-new Frontier up with the unveiling of the radically new fifth generation Pathfinder.

Said to be new from the ground up and harking back to the “rugged roots” of past models, the Pathfinder incorporates a more upright stance with a distinct blocky side view reminiscent of the R51, while the rear facia draws parallels with the now discontinued Lincoln MKT in the design of the tailgate and lights despite the massive block Pathfinder badge.

Deriving its looks from the X-Trail and to an extent the Patrol’s North American twin, the Armada, the Pathfinder still makes use of a unibody platform with dimensions of 5 004 mm in overall length, a wheelbase of 2 900 mm, height of 1 778 mm and width of 1 979 mm. 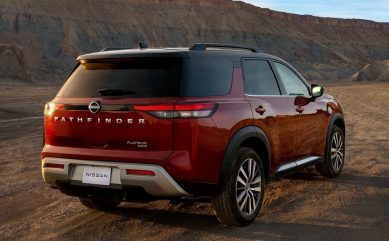 Despite being shorter in the former departments but wider than the model it replaces, Nissan has upped the ante by offering the Pathfinder with eight seats as standard for the first time, although a seven-seat option can be had as a no-cost option. Boot space is 470-litres with all three rows up and 2 279-litres with the second and third ones down.

Like the Frontier, the interior is a complete departure from that of the R51 in both design and layout, with the standard fitting of a new nine-inch touchscreen infotainment system, an optional 10.8-inch Heads-Up Display, the D-shaped steering wheel and blocky gear lever from the X-Trail, a 12.3-inch digital instrument cluster, tri-zone climate control, ambient lighting and a one-touch folding function for the second row. 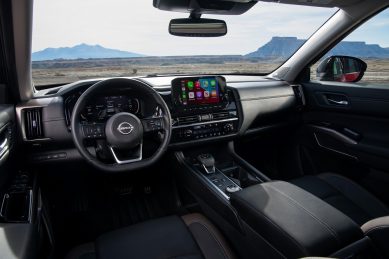 Apart from the entry-level S, the next step-up SV and SL adds Nissan’s ProPILOT semi-autonomous driving system to the mix, while the range-topping Platinum links satellite navigation to the system. Specified options, not limited to the latter, include a wireless smartphone charger and a 13-speaker Bose sound system.

Sporting a new power steering system and able to tow a braked trailer of no more than 2 721 kg, the Pathfinder’s engine is unchanged in the form of a normally aspirated 3.5-litre V6 petrol, whose 212kW/351Nm is now channelled to the front or all four wheels via a brand-new nine-speed automatic gearbox in place of the highly criticised CVT used before. Reserved for four-wheel-drive models, which still lack a low range gearbox, is a new terrain mode selector with seven settings; Eco, Standard, Snow, Mud/Rut, Sand, Tow and Sport.

Poised to follow the Frontier by going on sale in the North American summer with buyers having a choice of 14 colours, the Pathfinder is anticipated to retail from $32 000 (R480 004), but with Nissan bringing the Navara-based X-Terra to South Africa later this year, don’t expect the ‘Pathy’ to make a local market return anytime soon.