Despite the off-road hardware, no alterations have taken place underneath the bonnet. 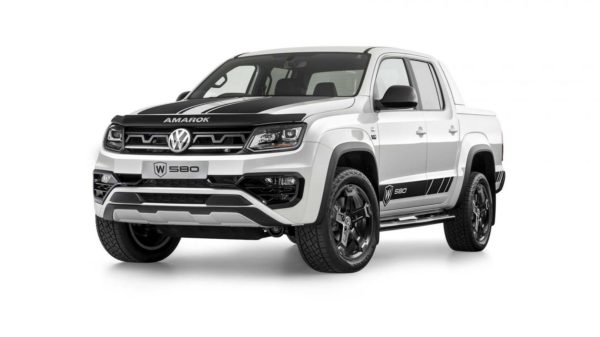 The famed Aussie tuner long associated with Holden, has given the Amarok another final send-off.

With the current eleven year old first generation set to be replaced next year by an all-new model based on the incoming Ford Ranger, iconic former Holden tuner Walkinshaw Automotive has released what is likely to be the final special edition version of the Volkswagen Amarok.

Arriving less than a year after the original W580, the W580X follows the same principle though in being an off-road focused model aimed at not only the Ranger Raptor, but Aussie market exclusives such as the Toyota Hilux Rugged X and the recently launched Nissan Navara Pro-4X Warrior.

Once again based on the top-spec 3.0 TDI V6, the W580X’s most prominent changes are to be found on the outside where it sports black bumpers and mirror caps, side steps, a front skidplate, black 18-inch forged alloy wheels wrapped in all-terrain tyres, a bonnet protector, LED light bar, black wheel arch extensions, black stripes and W580 badges.

Optionally available with a snorkel but fitted as standard with bi-xenon headlights, Walkinshaw branded velour trimmed seats with the fronts being heated, dual-zone climate control and a black roofliner, the W580X’s biggest drawing card is a raised front suspension as well as MTV twin-tube off-road dampers. Surprisingly, the claimed ground clearance was not disclosed.

Like with the standard Amarok V6 TDI and indeed its predecessor, the W580X’s power and torque figures are unchanged with 190 kW, 200 kW on overboost, being supplemented by 580 Nm. Drive is delivered to all four wheels as usual via an eight-speed Tiptronic gearbox.

Going on sale Down Under next year, the W580X is anticipated to carry a sticker price of $73 000 (R794 285), but like the Hilux Rugged X and in contrast to Ranger Raptor and the “under consideration” Navara Pro-4X Warrior, plans for a local market version is unlikely to become a reality.