An announcement regarding local market availability has so far not been made. 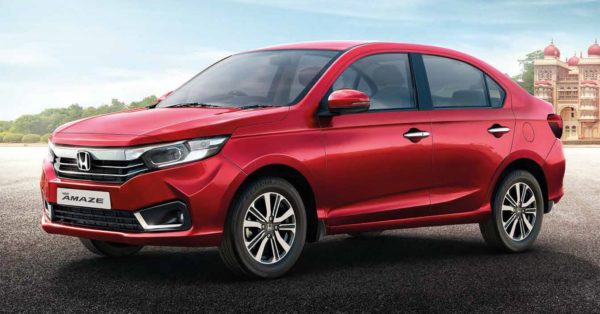 Exterior changes are small but easy to spot. Image: paultan.org

With three years having passed since its debut in India and shortly thereafter in South Africa, Honda has unveiled the facelifted Amaze that is likely to arrive on local showroom floors soon.

Inside, the changes are a lot smaller and limited to chrome detailing around the air-conditioning vents, silver accents on the steering wheel and dashboard, and a leather gaiter on models equipped with the five-speed manual gearbox.

Building on the E, the next step-up S adds a conventional audio system with four-speakers as well as Bluetooth and USB, plus the following:

Completing the range is the VX, which boasts 15-inch diamond-cut alloy wheels, a seven-inch touchscreen infotainment system with Apple CarPlay and Android Auto, as well as the following:

Up front, Honda has kept the engine line-up unchanged, with petrol power coming from a normally aspirated 1.2 that makes 66kW/110Nm and diesel motivation from a 1.5 that delivers 74kW/200Nm.

The mentioned manual gearbox is standard across the range with the option being a CVT, whose application on the oil-burner results in outputs dropping to 60kW/160Nm.

In total, the Amaze offers a choice of five colours;

Now available in India, expect an announcement about South African availability to be made within the next few months, but as before, don’t expect the diesel variant to be offered.

Additional details from paultan.org and auto.hindustantimes.com.