Rumoured 3.0-litre turbodiesel V6 has been confirmed along with a completely new interior and Maverick style exterior. 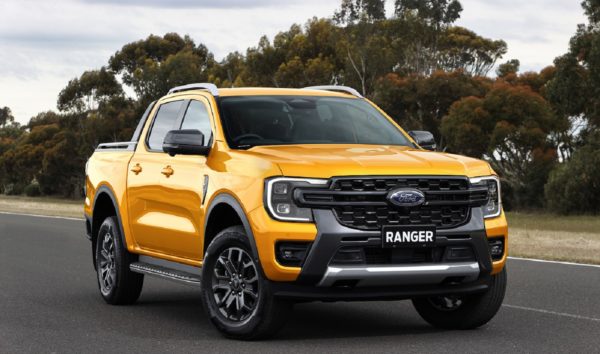 After nearly three years of speculative reports, pre-production spy images and numerous contradicting claims, Ford has officially taken the wraps off of the all-new Ranger that will be built in South Africa next year.

The first completely new Ranger in over decade, the newcomer, reportedly called T6.2 as opposed to the previous T6, will form the base for the next generation Everest and Volkswagen Amarok with sales set to take place in 180 countries.

Tested over various terrain for nearly two million kilometres, the Ranger, as evident by spy images that emerged last month, takes styling inspiration from the Maverick and F-150 as per the Blue Oval’s “Built Ford Tough” mantra.

“We really looked at Ranger as the F-150’s brother. Ranger has developed a strong following over the past 10 years, and we really leaned into the iconic design features that have made it such a beloved truck across the world but also push the design envelope,” Ranger Chief Designer Max Tran said.

Resembling its junior sibling when viewed from the front, the Ranger sports a 50 mm increase in wheelbase with the rear facia being both Maverick and F-150 inspired. Available for the first time however is a step-step located behind the rear mudguards with the tailgates being of a model specific design.

Depending on the market and trim level, the Ranger will come as standard with the automatic roller shutter that debuted, in South Africa, on the Stormtrek with wheel sizes ranging from 17-inch alloys to 20-inch machined alloys.

Riding on a revised version of the previous Ranger’s chassis incorporating not only the mentioned wheelbase increase but also re-positioning of front wheels forward by 50 mm, Ford has also relocated the rear dampers to the frame rails in order to improve the ride quality both on and off-road with or without a payload.

“We’ve increased the tuning range to give our customers the best of both worlds, so you’ve got the capability, toughness and durability that Ford trucks are known for, plus comfort and a more car-like ride that Ranger is known for,” Ranger Programme Director Graham Pearson said.

As well as the mentioned side-steps, the Ranger follows its siblings in being offered with not only a new loadbed-liner, but also the cargo management system that allows for the bed to split into various compartments in order to separate different cargo items from each other.

At the same time, the tailgate serves as a workspace in that it can be specified with the same assortment of stationary and tools as the F-150. New though is a 360-degree lighting system activated using the Ford PassApp smartphone app or via a button inside the loadbox.

As evident by a images posted last week, the Ranger will offer a range of accessories, including a selection made by off-road specialists ARB as part of an agreement signed back in May.

Arguably bigger than the exterior and chassis changes is the interior. Falling in-line with the Maverick and F-150, the completely redesigned cabin spots a more upright dashboard that houses either a 10.1-inch or a twelve-inch portrait-style touchscreen infotainment system with SYNC4 software.

Along with these, the steering wheel is new, the centre console slimmed down and the climate control less button focused. While the indicator and windscreen wiper stalks are carried over, the gear lever, initially planned to be a rotary dial, makes way for a stubby selector, the analogue instrument cluster for a digital display, albeit on higher-end models only, and the blanked-out facia of the rear console for air vents.

In addition, Ford has also upgraded materials, mounted the door handles lower as a result of customer demand and fitted redesigned seats with more foam as well as new side bolsters. Exact specification regarding features and safety systems will be announced later.

Up front, the initial batch of engines will comprise four units; two versions of the single-turbo 2.0-litre Panther turbodiesel, a non-electrified 2.3 EcoBoost petrol for the United States, the 2.0-litre bi-turbodiesel Panther and as mentioned on a number of occasions, the 3.0-litre turbodiesel V6 once used in the F-150. No power or torque figures were revealed.

For now, only three trim levels star; XLT, Sport and Wildtrak with more entry-level models, including workhorses, arriving in due course. Ford has also confirmed availability of single, super and double cab bodystyles but nothing of the new Raptor.

As mentioned, the Ranger will be entering production at Ford’s Silverton Plant outside Pretoria in early 2022 with sales expected to start not long after.

WATCH: New Ford Ranger showing itself on 24 November
1 month ago
1 month ago

WATCH: New Ford Ranger showing itself on 24 November
1 month ago
1 month ago