Compared to its predecessor, the Starlet is better distinguished visually from the Suzuki Baleno it is spun-off of. 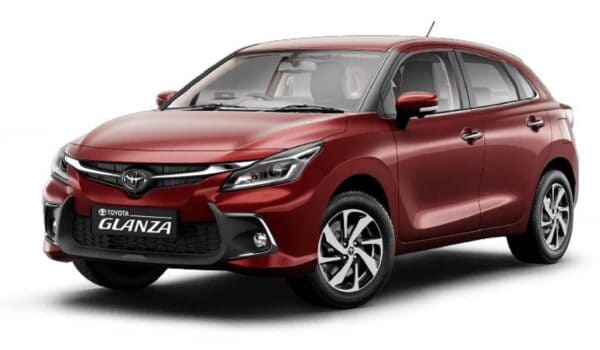 Resembling the Camry, the facelift Glanza will once again be offered in South Africa under the Starlet name. Image: motorbeam.com

Revived in 2019 as a nameplate instead of denoting the performance version of the Starlet like it did in Japan over two decades ago, Toyota has officially revealed the heavily updated Glanza in India three weeks after the model it is spun-off of, the Suzuki Baleno.

On course to be offered in South Africa soon, again under the Starlet name, the Glanza’s visual differences from the Baleno are more prominent than before, and indeed from that of its pre-facelift predecessor.

Whereas the latter only differed from the Baleno by means of a Toyota badged grille and steering wheel, the changes to the updated Glanza are more thorough and includes a Toyota specific grille with a chrome strip on higher-end models, a new front bumper, slightly restyled headlights and different alloy wheels.

Inside, the Glanza is unchanged from the Baleno with the only difference being the swapping of Suzuki badges for Toyota ones, and a black/beige interior option versus the standard black the Baleno comes as standard with.

In India, the Glanza comes in a choice of four trim levels; E, S, G and V that are identical in spec to the corresponding Baleno Sigma, Delta, Zeta and Alpha.

It is worth noting though that the mentioned items are likely to be offered only on the top-spec V.

Pumping out an unchanged 66kW/113Nm, the unit is paired as standard to a five-speed manual gearbox or a five-speed automated manual (AMT) that replaces the CVT previously offered.

With Suzuki Auto South Africa having confirmed availability of the Baleno from June, chances are that the Glanza will debut soon after once again, as mentioned, badged as the Starlet.

Although still to be announced, the Starlet is expected to retain the current model’s three grade trim level strategy (Xi, XS and Xr) as opposed to the GL and GLX designations heading the way of the Baleno.

Compared to the Glanza, and the Indian-spec Baleno, the South African market Starlet will be similar to the equivalent Baleno up front, meaning the replacing of the K14B 1.4-litre petrol engine with the 1.5 K15B used in the Vitara Brezza/Urban Cruiser, Jimny, Ciaz/Belta and Ertiga/Rumion.

Producing an identical 77kW/138Nm, an increase of nine kilowatts and eight Newton Metres, the unit will be mated to a five-speed manual gearbox or an optional four-speed automatic as opposed to the AMT available in India.

Expect an announcement pertaining to spec and possibly price soon.