In legendary Acropolis fashion, the rock strewn roads around Athens will be live up to their reputation as a car wrecker. 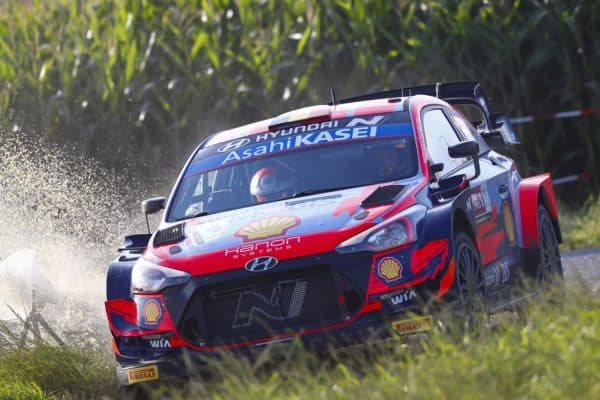 Man on a mission will be Thierry Neuville hoping to close down the gap to the head of the table. Image: Hyundai Motorsport GmbH

It’s back! One of the World Rally Championship’s toughest European rounds, the legendary Acropolis Rally in Greece will once again challenge drivers, co-drivers and service crews.

First held in 1953 it became a founding member of the FIA WRC in 1973, in fact the seventies the event normally featured 50 stages totaling 850 km of hard competition. Cancelled in 1974 due to an international oil crisis and became a round of the FIA Two Litre Cup in 1995.

In 2005 the Acropolis was named Rally of the Year after an incredible super special stage in a packed Olympic Stadium in Athens. In 2013 the rally was dropped from the WRC calendar and continued as a round of the European Championship.

The worlds best drivers have challenged the rocky roads and the winners list is a veritable who’s who of the WRC world, including names such as Walter Röhrl, Björn Waldegård, Ari Vatanen, Miki Biasion, Juha Kankkunen, Carlos Sainz, Sébastien Loeb and of course the Acropolis king with five wins between 1996 and 2002, the late Colin McRae. The Scot winning twice in a Subaru Impreza and from 2000 in a Ford Focus, helping to make the Blue Oval the most successful manufacturer with 13 victories.

After an eight year hiatus, 54 entries will face a total of 1 285.85 km which includes 15 special stages covering 292.19 km of twisting mountain roads with high temperatures and rocky surfaces which will become more difficult when entrants make the second pass over the stages.

This Thursday mornings shakedown will be followed by the ceremonial start in the city of Athens, after which the teams face a short street stage around Syntagma Square then an overnight halt before Fridays stages from the central service park located at the National Trade Fair in Lamia in central Greece, 220 km north of Athens.

The big push will certainly be from the Hyundai Shell Mobis WRT (307 Points) and particularly the car of Thierry Neuville (124 points) and co-driver Martijn Wydaeghe whose victory in Belgium means he is tied for second place in the driver’s championship.

Teammate Ott Tänak (87 points) with Martin Järveoja alongside, are experiencing a tough season with only two visits to the podium and will be hoping for a clean run in Greece. Dani Sordo (31 points) is back with new navigator Cándido Carrera, a difficult event to settle the new duo.

The combination of Kalle Rovanperä (99 points) with co-driver Jonne Halttunen will be chasing another good result this weekend. Greece also sees the return of Takamoto Katsuta with Keaton Williams in the TGR Yaris following their massive roll in Belgium.

M-Sport Ford WRT’s Teemu Suninen’s immediate departure from team came as a shock to all coming just days before the Acropolis rally. His Fiesta Rally2 entry for the Greek round was withdrawn, the Finn saying, “It’s time for us to say goodbye to M-Sport.

“I’m grateful that I had a chance to be one of the WRC team drivers for several years. It has been a journey full of learning with some great moments. However, nothing lasts forever, and we have now decided it’s time to go on to new challenges.”

This leaves the usual two team entry for M-Sport Ford WRT (135 points) with Gus Greensmith (34 points) and co-driver Chris Patterson and team mate Adrien Fourmaux (30 points) with Renaud Jamoul. The combination has shown improvement this year and perhaps with Fourmaux settled into a WRC for the rest of 2021 we may see a stronger team for next year.

With only three rounds of the 2021 WRC season, Japan unfortunately falling to the Covid-19 pandemic, the pressure is on in a championship that could well go down to the wire.