Oscar Pistorius sat with his head in his hands yesterday and wiped away tears when the court heard about the "serious, serious brain damage" sustained by Reeva Steenkamp when he shot her. 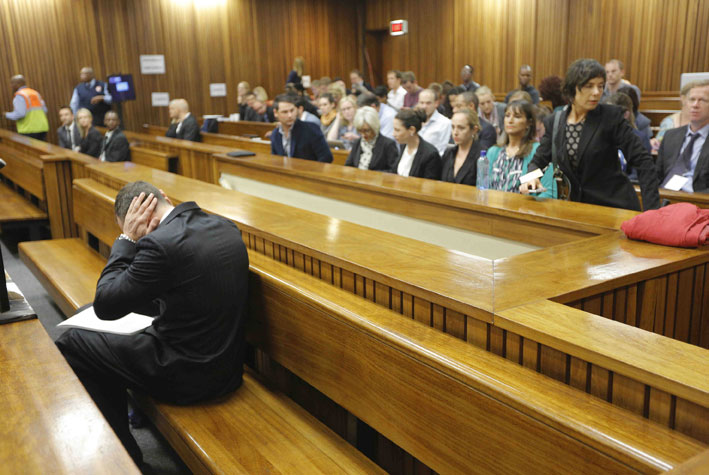 South African Paralympic athlete Oscar Pistorius sits quietly on his own after arriving at the High Court in Pretoria, South Africa on Tuesday, 4 March 2014. Pistorius stands trial for the 2nd day for the premeditated murder of his model girlfriend Reeva Steenkamp in February 2013. Picture: Kim Ludbrook/Pool

Roux said it was clear from a report by the State’s ballistics expert that four shots had been fired and from medical evidence that the total impact of those shots would not have allowed Steenkamp to scream.

“In fact, the State witness tells us when she sustained the head shot she would have dropped down immediately.

“…There was serious, serious brain damage and a person with that brain damage will have no response, no cognisance.”

Roux said the defence would dispute the State’s version that the first bullet had hit Steenkamp in the thigh, the second shot missed, the third hit her in the shoulder and the fourth bullet hit her in the head.

Roux put it to Burger that her version of hearing screams while shots were being fired was not possible because she lived 177- meters away and Steenkamp was shot behind a locked toilet door with the window closed.

Burger replied that she had heard petrified screaming from a woman in fear of her life and that the screaming continued while the shots were fired, stopping shortly thereafter.

She denied being influenced by television to draw the conclusion that Pistorius’s version of a terrible accident could not be true.
Roux put it to her that the only person screaming that night was Pistorius, but Burger replied that she had definitely heard a woman and not Pistorius.

Roux said Burger’s version that she had heard a woman and a man screaming for help was at odds with the State’s claim that he deliberately wanted to kill Steenkamp. “If there’s a man about to kill his girlfriend, she runs away, she hides in the toilet and he shoots her through the toilet door, one thing that’s inconsistent with that is a man in the same house shouting for help to the extent that you reconciled the shouting with an attack,” he said.

Roux put it Burger that she had wrongly interpreted the sounds of a cricket bat hitting a bathroom door as shots and the screams she heard as those of a woman.

Prosecutor Gerrie Nel at one stage objected that Roux was badgering the witness. Judge Thokozile Masipa warned Burger to answer the questions or remain in the witness stand for days.

Burger cried at the end of her evidence, saying she had experienced “raw emotion” when she made a statement to the police.

The evidence of Burger’s husband Charl Johnson mirrored hers in many respects, except that he thought he heard more shots and at one stage was under the impression that there was a domestic dispute.

He said they at first did not want to become involved because of the publicity, but felt morally obliged to do so when they heard that the version on the radio differed from what they had heard that night.