Doctors have decided that Sean can recuperate at home. 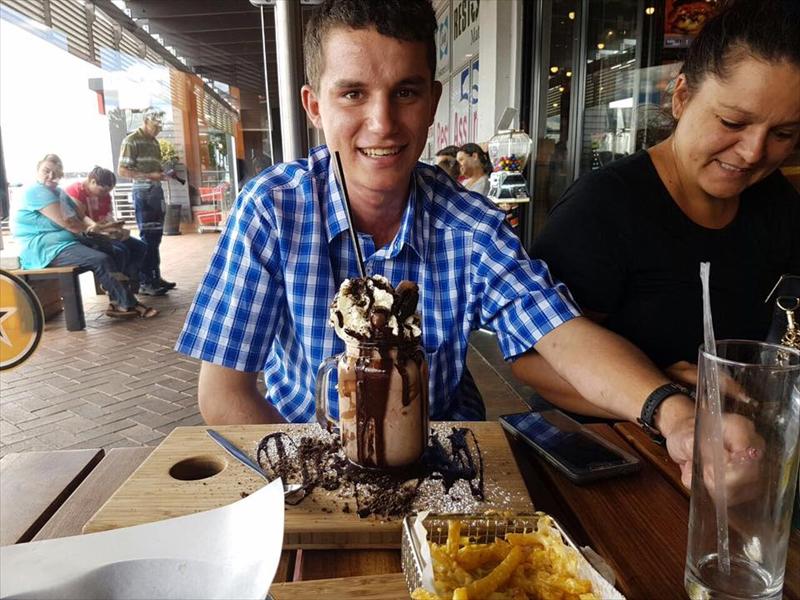 Sean and his mother, Mé-Lissa out and about.

She told the Rekord on Tuesday that Sean was sent home for the holidays so he could spend Christmas with his family.

“Everyone was so happy to have him here.”

“He turned 17 on 24 December and was overjoyed that he could be around loved ones.”

Doctors had since decided that Sean could recuperate at home.

Mé-Lissa said Sean suffered from depression because he still needed to go to hospital for check-ups and minor procedures.

She said he walked leaning forward, which put a lot of strain on his body.

“Hopefully they can perform a procedure so his body movement can improve.”

“He has his ups and downs where he feels he is a burden to me. He wants to help me with everything, but I just want him to relax and I’m happy to have him home.”

“He is still very withdrawn from society because of his injuries, but I have been working hard to keep him afloat.”

Mé-Lissa said being a single mother was very tiring.

“I do not get much sleep at night.”

She said there was still a long road of recovery ahead, but they had to start thinking about moving forward.

“We have to start thinking about his future, including school and college. Things need to start to normalise now.”

Mé-Lissa said other than Sean’s mood, he was still the kind-hearted child she raised.

“He knew what I wanted as a Christmas gift and he spent the money he got from his uncle to get me a present.”

Mé-Lissa said she was grateful to everyone who made it possible for Sean to receive the best medical care.

“He still has a long way to go with operations ahead, but we wouldn’t have gotten this far without everyone’s help. We appreciate it.”

Sean is due for a consultation on Wednesday to see if it is necessary for an operation under his arms where he had skin-graft surgery.

This happened after he came to the assistance of a woman whose car broke down in Eldoraigne.

Smith suffered 45%-55% burns internally and externally when his shirt caught fire as he was helping a stranded woman start her car.