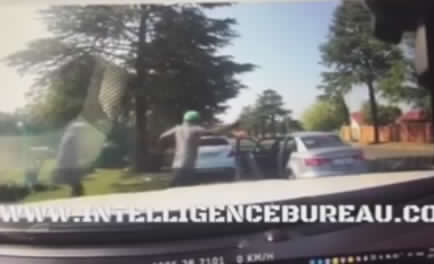 Norkem Park police in Kempton Park are investigating a case of attempted murder and armed robbery after a woman was attacked in Edleen on Tuesday.

At about 9.40am, two armed men robbed a woman of her R8 000 Rolex watch and car keys, Kempton Express reported.

“The woman was attacked by three suspects, two armed with pistols, as she was entering the home to collect her clothes,” said Norkem police spokesperson Captain Lesibana Molokomme.

A video of the incident was published on Intelligence Bureau SA’s Facebook page.

The video shows a woman walking from a white Mercedes Benz parked outside a house on Okkerneut Street.

Then, just a few seconds later, a second car, a silver Audi A4, pulls up behind the Merc, and two armed men come out running towards her. Noticing the men, the woman also starts running.

They manage to catch up with her and, within a few seconds, take her Rolex and car keys.

“A neighbour of the woman’s, an elderly man aged 74, who was watering his garden, happened to see the incident and tried helping the woman by approaching the suspects. One of the suspects fired a shot at the man,” Molokomme confirmed.

In the video, it shows the elderly man throwing himself down next to the suspects’ car as they fire the gun. Fortunately, they missed, and the man was not injured.

One 9mm cartridge was found on the scene.

The suspects left the scene in a silver Audio A4 with registration number DL 16 DN GP.

WEATHER WATCH: Joburg underwater after flooding and thunderstorms
3 hours ago
3 hours ago

WEATHER WATCH: Joburg underwater after flooding and thunderstorms
3 hours ago
3 hours ago