The reason for the shooting is still not yet known. 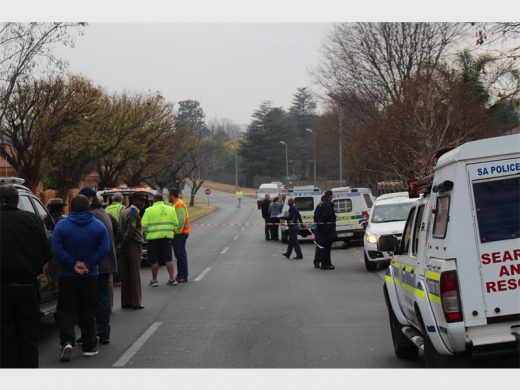 The scene on Clifford Street, Chancliff was flooded with emergency services vehicles attending to the incident.

A video has emerged of the morning incident where a man shot a woman then turned a gun to himself.

The video has been obtained from a CCTV camera where a few security guards were stationed outside a complex and witnessed the shooting, Krugersdorp News reports.

The footage shows two people arguing on the side of the road opposite the entrance of the complex. It also shows a vehicle parked across the street from them. They stand fairly close to each other, but then one runs as the other takes out a firearm. The man then fires one shot at the woman.

The shot misses its target, and the woman is able to get away. She then runs around the tree and he fires another shot. The second shot hits her, but she continues to try to escape. Then he shoots two more rounds before she drops to the ground, lifeless. The man walks across the street and gets into his vehicle. Not much of what happens inside the vehicle can be seen, but reports suggest the man shot himself in the head.

RDS Security’s guards were stationed at the estate and also witnessed the shooting. The guards called emergency services shortly after the shooting and were able to provide police with information for their investigation.

RDS Security has asked community members to remain vigilant in and around the area.

Initially, the man believed to have been a Red Ant security guard, shot and killed his alleged girlfriend on Clifford Street, Chancliff at about 7.30am this morning after an argument between the two

It is was also alleged the man also shot himself in the head.

Eyewitnesses say the two were arguing next to the road when the man suddenly pulled out a firearm and shot the woman.

“I was on my way to work,” said one of the witnesses, who wished to remain anonymous because of the police investigation. I saw two people chasing each other around a tree. At first I thought it was two children chasing each other. Then the man pulled out a gun and I realised this was no child’s play. Then, the man fired a shot at the woman. The first shot missed as she continued to run around. Then he fired two more shots. One seemed to hit her in the chest and the other in her head. She dropped to the ground and laid there, motionless.”

The perpetrator then turned and walked towards the eyewitness who was parked a distance from him.

“I panicked and asked the security guard at the complex if he was armed. Then I heard more shots. I thought he was firing at me, but when I turned round, I saw that he was in his car.” 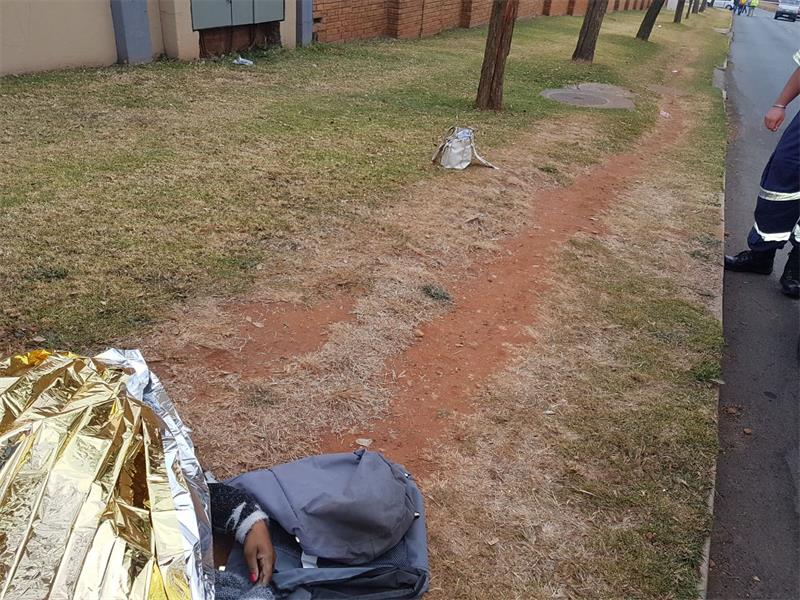 The covered body of the woman who was shot on the pavement. 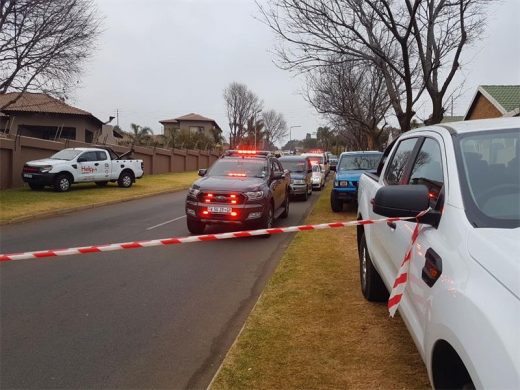 Emergency services barricaded the scene to keep community members out.

Another eyewitness who was in his vehicle further up the road said the man shot himself.

“I stood there and a bullet came flying past me,” said the second witness, then I saw him get into the car, put the gun against his head and shoot himself.”

The witnesses called ambulances to the scene, but paramedics declared both victim and perpetrator dead soon after arrival.

Local Community Policing Forum patrollers barricaded the scene to prevent the public from entering. Krugersdorp Police’s K9 unit and other officers arrived on scene to investigate the murder/suicide.

Various emergency services personnel, from Help24, Netcare 911, ER24, the traffic police and others, were also on scene to assist in any way possible.