A collapsing road in Limpopo has been given an interesting moniker after allegedly being linked to an old company the EFF leader was once part of. Democratic Alliance proportional councillor Fredrick Phol had initially informed the Letaba Municipality of a “sinkhole” on Uitzig Street in Modjadjiskloof on Sunday via a Facebook post, but it apparently fell on deaf ears.

Pohl then went and cordoned off the road himself.

“These water and sewer pipes are Malema’s pipes.”

That’s how a resident and former ward committee member described it after a huge part of Uitzig Street later collapsed.

Claims of poor construction work and judgment have been made after residents were greeted with the collapse of a large piece of the road.

A resident who used the road on Sunday morning said he drove over the section at about 1pm.

“I felt the section was half wobbly when I drove over it.”

A former ward committee member who also once served on the infrastructure committee in 2011 said Uitzig Street was part of a construction tender awarded to SGL engineers in 2011, of which Julius Malema was one of the co-owners. The tender amounted to several millions.

“Three construction companies were contracted at the time. The tenders followed the correct prescriptions. But the contractor made other decisions,” said the committee member.

According to him, the design then was that the new sewer pipes were to be laid under the sidewalks. 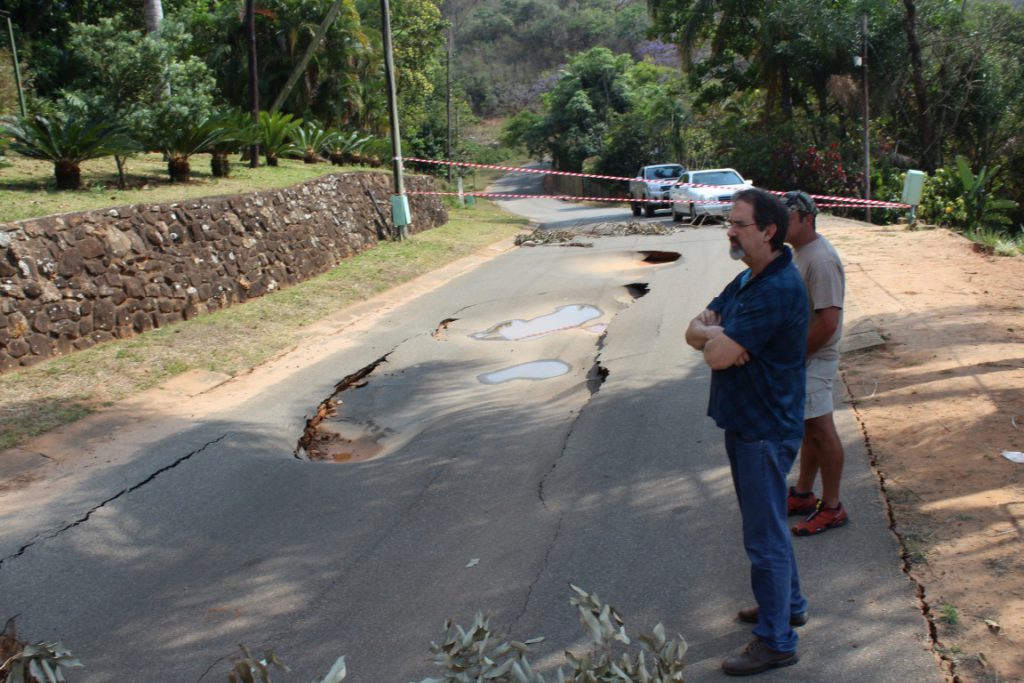 “They cut power and telephone wires. The contractors and the municipality decided to breach holes in the middle of the tarred streets to lay the new sewer pipes,” he said.

He claims he told the contractors from the outset that the compaction of the soil was done incorrectly.

“Only the upper part was left over at that time. It was a project worth almost R8 million,” he said.

Another resident who lives in front of the section said he also tried to explain to them that the compaction was not done correctly.

“I have a degree in engineering, I reiterated,” he says. The fact that it is a sewer pipe that leaked and burst was ruled out as the cause. The residents determined this themselves after taking samples of the water and tasting and smelling it.

“This is drinking water. It must be a water pipe which started to leak over time, or an illegal water pipe connection. The soil became muddy over time, and the compaction gave up. A weak foundation and a water leak is what happened here. Nobody will probably accept responsibility for this,” said the resident.

Some of the residents also allege they have not had water for about two years between 9pm and 5am. Water supply is apparently cut off to provide water to Ga-Kgapane.

However, Ga-Kgapane residents have adamantly denied this, insisting they only receive water supply once a week, on Saturdays.

“If they turn the water back for our part, the road will be completely broken.”

According to Uitzig street residents, it will cost in the vicinity of R3 million to fix the damage.

“They’ll have to dig deeper, and an engineer will be needed.”

Two officials of the Letaba Municipality who arrived at the scene told Letaba Herald to speak to the municipal spokesperson.

“You can only write it’s a water pipe leak,” said one of the ward committee members.

“Our roads and water teams are currently working on the problem and trying to find a speedy solution. We advise all inhabitants to avoid the road in question. Also be on the lookout for children on the road with their bikes. The road is not at all suitable for cars or pedestrians. Patience is requested during construction,” according to Maenetje’s statement.

They couldn’t give a clear explanation on what the municipality would do, or how long it would take before they started construction.

The residents of Modjadjiskloof have already requested that the freshwater leak be looked into. They insist that the municipality inform them as to when exactly they plan to do so, how long it will take and have undertook to monitor the situation.

Lovers Maenetja, media spokesperson for the Letaba Municipality, said they had visited the site and determined that there was a pipe burst under the tarred road.