One of Oscar Pistorius's neighbours yesterday told the North Gauteng High Court how touched he was when Reeva Steenkamp opened her arms and hugged him when they met for the first time shortly before her death. 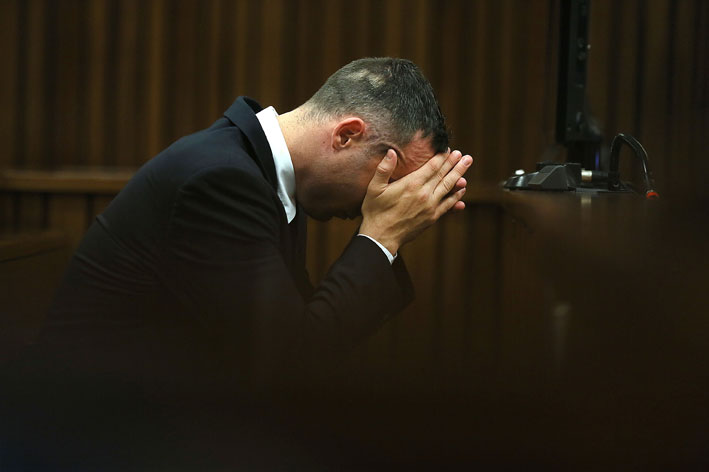 FILE PICTURE: Paralympian Oscar Pistorius sits in the dock during the testimony of a defence witness at his murder trial at the high court in Pretoria on Tuesday, 6 May 2014. The 27-year-old double amputee sprinter is accused of the murder of his girlfriend Reeva Steenkamp on Valentine's Day last year.Picture: Alon Skuy/Times Media Group/Pool

Civil engineer Michael Nhlengethwa testified Pistorius was the first one to welcome him to the neighbourhood when he moved into the Silverwoods Estate with his family.

He had also been to Pistorius’s house to see what the finishes would look like because they had the same developer.

Pistorius was friendly and the type of person who would not just wave in passing, but would stop, get out and talk to him outside his house.

They both had a passion for cars and Pistorius would stop and show him his car whenever he bought a new one.

Nhlengethwa said he had met Steenkamp for the first time on the Saturday or Sunday before her death. Pistorius was test driving a new BMW and introduced Steenkamp to his neighbour as his fiancee.

“One thing really struck me about her. I don’t think I’ll ever forget that moment. I raised my hand to greet her when she came forward and she just opened her arms and came and hugged me.

“I could see the person she was at that point in time … she closed the boundary. That meant something. That’s why I was so touched when I met her that day.

“From there, Reeva gave us space and moved towards the car. I said to Oscar: ‘Oscar, this one is for keeps’,” he said.

When Pistorius said he was moving to Johannesburg the following month to be closer to Steenkamp, Nhlengethwa said he would be sad to lose a neighbour like him, but if it was for Steenkamp, it was worth it.

They laughed and Steenkamp hugged him again before she and Pistorius left.

Another neighbour, psychologist Rika Motshuane, also testified that Pistorius was the first one to call at their home to welcome them when they moved to the estate.