After Zuma spurned Khoi San protesters, Ramaphosa attends to them

The Khoisan leaders are contending ANC's definition of 'African in general and black in particular' is discriminatory towards them. 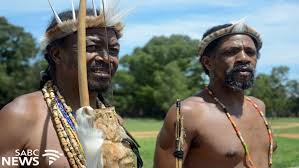 When The Citizen Online spoke to Anthony Phillips Williams, the coordinator of Khoi San Liberation and Mass Movement at the media entrance to Nasrec where the ANC was holding its national conference, he was far from impressed with the entire ANC leadership and delegates congregated a few meters away from his protest.

That is because Williams found the demeanour of the ruling party insulting, as he wondered how Black South Africans who waged an undergrounnd struggle against apartheid few years could take him and and his fellow protesters for fools.

They cut a forlorn figure to the entrance of the venue as ANC heavyweights as well as media crews and delegates whizzed inside in air-conditioned SUVs without so much as waving.

He said this characterizes the ANC of today, treating aggrieved stakeholders with contempt and shamelessly ignoring them as they showed off shiny wheels.

Williams demonstrated an ancient-old customary greeting, where the author’s hand was guided to his chest and he directed his to the greeter’s shoulder, and began narrating a frightening tale of how his group’s demonstration at the Union Building was belittled.

“Gtsaeses” he said as he waved my handshake away.

“We are asking the ANC to explain what it means by ‘Africans in general and blacks in particuclar’ as we consider ourselves the ‘first nation of this country’. They are rejecting the traditional Khoi San communities in this country,” Williams said as we both struggled to keep out of speeding imported snazzy vehicles driving into conference venue.

Willliams rewarded my puzzlement by explaining the traditional greeting is reserved for the most revered and visitors into their households, and apologised for unsettling me with the gesture and we got down to the interview.

He said so disgruntling is the ANC’s dismissive approach towards their demands that they resorted to go directly to the top – the United Nations. The UN has a clause on protection of indigenous people across the world the group is pinning its hoped on.

“When we were at the Union Buildings last week, Jeff Radebe accepted our memorandum. He said we should come back on Thursday. All we want from him is ensure the constitution recognizes us as the indigenous people of this country and stop discriminating us with their definition of who is an African,” he said as another SUV hooted at both of us.

After President Jacob Zuma told the group he is only available to meet them a month from this week, his political boss and the deputy president of the country Cyril Ramaphosa traveled to the Union Buildings today to assure them government will heed to their demands within the framework of the country’s constitution this morning.

Presidency statement on the Khoisan delegation at the Union Buildings. pic.twitter.com/xCM2sQGDic

In a video  posted by Busani Ngcaweni, head of Zuma’s private office and spokesperson, Ramaphosa could be been seen consorting with the delegate dressed in their traditional regalia.

“As we handle [this issue] I will be consulting you with on an on-going basis.  We will discuss all these matters and we will give consideration to your memorandum and we will be coming back to you,” a relaxed Ramaphosa in a casual shirt spoke to them.

One of their members, just as I learnt at Nasrec, showed Ramaphosa another age-old customary salute denoting bidding of a farewell and softly told the deputy president the Khoi San nation greatly appreciates his kindness.