'Zuma will go jail, we want to see him suffer. It is not over. We want to fetch him from the village to Kgosi Mampuru.' 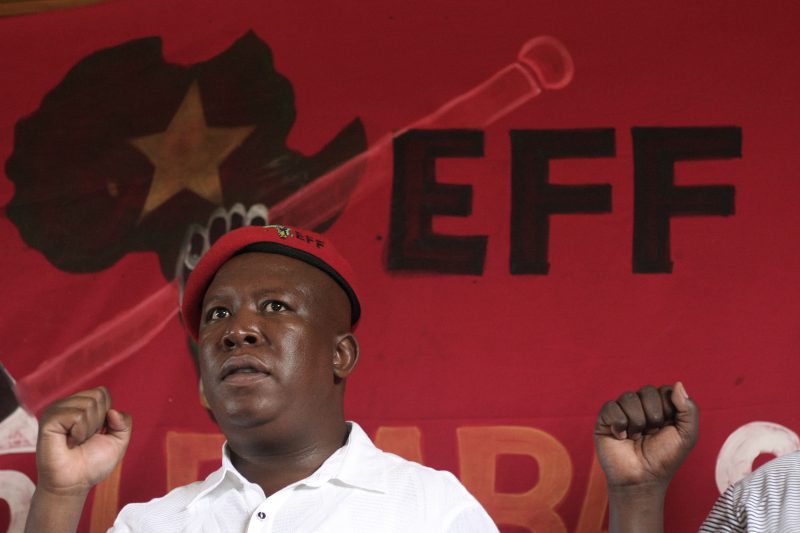 EFF leader Julius Malema salutes Relela residents in the local town hall following his visit to the families of residents that died in recent protest action in the area, 03 February 2014. Picture: Refilwe Modise

EFF leader Julius Malema has challenged the “ANC of [Cyril] Ramaphosa” to show it “is honest and truly seeks a new and stable future” by agreeing to its call for early elections.

Malema said his party believes “this parliament has been complicit in creating the personality cult that is Jacob Zuma and it must be dissolved to reconstitute a new leadership of South Africa with a fresh mandate from the general participation of our people through elections.”

He also repeated statements made on prior occasions that the EFF has no confidence in the entire leadership of the ANC and will be submitting a motion this afternoon.

Malema: We cannot afford to have another day with Gigaba in office. Our purse is in trouble as we speak. #EFFPresser

Malema passionately denied that he was planning on going back to the ANC, as the primary reason he refused to apologise and was subsequently expelled from the ANC was his fight with former president Jacob Zuma.

He also downplayed his own role in the near collapse of Limpopo provincial administration and blamed former SARS commissioner Pravin Gordhan: “He wanted to make the people of Limpopo suffer by collapsing the government. Cassel [Mathale, former premier] was scared. Pravin was working with crooks who came after me. They humiliated me  and took my property. I won’t go back to the ANC because [Jacob] Zuma is gone.”

RELATED: Malema: I want to thank the ‘incoming acting President’ Mbete for allowing a secret vote

Malema said Gordhan may have been targeted by pro-Zuma forces in the ANC but that “doesn’t change the fact that he humiliated me in the hope that I will go sell loose cigarettes in Zone 1 Masakaneng in Seshego”.

Malema said journalists attending his party’s post-Zuma resignation press conference will now be tested in the newsrooms as Ramaphosa is on good terms with white monopoly capital that apparently own most news agencies. 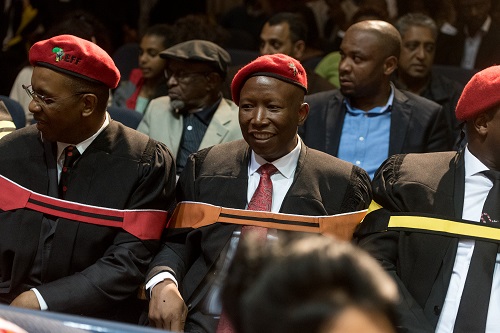 Leader of the Economic Freedom Fighters (EFF) Julius Malema sits with EFF leadership in the Great Hall of Wits University on 5 December 2017. The EFF members were there to celebrate the graduation of Mbuyiseni Ndlozi as a Doctor of Philosophy in Politics. Picture: Yeshiel Panchia

“Ramaphosa, your master, your lucky star from the packet relied on the opposition to remove Zuma. You wish opposition away and that will be the end of this Madiba’s constitution. We are not petty, we are superior like that. That is why we mentioned Lindiwe Mazibuko. I have apologised to her for calling her names [tea girl] in defence of Zuma. We took the baton when the white party dumped her,” he said.

“You will be tempted to surrender to white monopoly capital media, remember Mandy Rossouw. The EFF remember Mandy Rossouw for not accepting brown envelope journalism. Now that white monopoly capital is in power, many of you here are going to be tested [You will be expected to write things in favour of your bosses who may not necessarily allow you to write freely against them in the same breathe they were allowed to write about Zuma].”

MORE: Malema: Blade just ate, the only thing that changed in his life was his growing tummy

Malema questioned how the appointment of Sifiso Dabengwa to Eskom board has not been interrogated in the media as it well known the pair are friends. He also told journalists Dabengwa’s wife was the  CEO of the Ramaphosa Foundation – “The relationship of Dabengwa is the same as Dudu Myeni being the girlfriend of Jacob Zuma. Dabengwa is Ramaphosa’s boyfriend. You will not be allowed to write about this by your bosses.”

He said the only reason this matter has not been paid attention is that “white monopoly capital media” found it doesn’t resonate with the their narrative – “If it was Mosebenzi Zwane or another black politician you will be writing about it, we are asking for consistency here.”

Malema then laid into “that crook Malusi Gigaba who illegally granted the Gupta family citizenship” and who “must not be allowed to deliver the budget.”

Malema accused Gigaba of destroying  the late Sindiso Magaqa’s political career because he was exposed of buying flowers with a government credit card. He suggested that Zuma himself knew this, and the ANC proceeded to “hijack” the funeral for “factional reasons.”

“Zuma will go jail, we want to see him suffer. It is not over. We want to fetch him from the village to Kgoshi Mampuru [prison]. I told him when he expelled us that you are fighting with the wrong people because we have age on our side.. In SONA he [Ramaphosa] must announce the removal of minister of finance [Gigaba]. This man can not be trusted and he must not deliver the budget speech this week,” he said.

Was Malema ‘Mantashe-ing’ with his Zille threats?